Author interview with Jenna Brandt of ‘The Viscount’s Wife’ 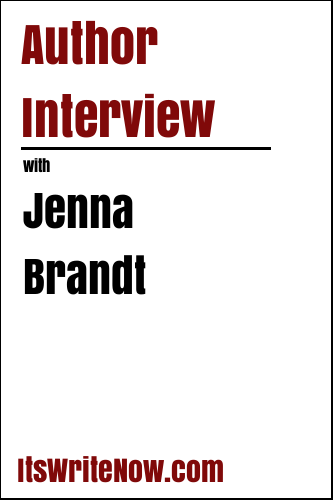 Lord William Almonbury is the spare heir, allowing him the freedom to travel the world and marry for love. Inheriting his father’s viscountship was never in the cards, but when both his brother and father become ill, William is summoned home to take over the family affairs. When Debbey met and married William Almonbury in America, his nobility was part of his past. She never imagined due to unforeseen circumstances, she would not only move across the world but suddenly become a viscount’s wife. Thrust into a world unlike anything she could have ever imagined, Debbey must learn to navigate being the new Viscountess Braybridge. Will William be able to handle the pressures of his new title? Can Debbey win the hearts of William’s friends and family? Or will their new life in England destroy their hope for a happy marriage?

Is there a happily ever after in Debbey’s future? Jenna Brandt has kindly returned to ItsWriteNow.com to see if we can navigate Debbey’s future in England. But before we get to lost in the world of peerage and titles, I want to know what’s been keeping you busy since we chatted last in June 2017.

I finished up my 7th book in the Window to the Heart Saga which comes out at the end of the month and I just started a new multi-author series called The Lawkeepers which debuts on 2-8-18. I also have my first book in my WWI trilogy in Melissa Storm’s First Street Church kindle world that came out in November and the next one is releasing in March.

Wow, you have been busy! With so many different writing projects on the go, how do you feel the direction of your writing journey has changed since we chatted six months ago?

I have garnered more opportunities to work with other authors including releasing an anthology, writing in a kindle world and creating a multi-author series. It’s been fun collaborating with other talented authors and having their readers find my books and vice versa.

You’ve really turned writing into a team sport, which is something that I love to see authors do. We would have so much fun chatting about turning writing into a fully fledged team sport, but I want to hear more about ‘The Viscount’s Wife’, so we’ll have to leave team writing to another day. Instead, can you share how the initial inspiration behind this novel?

The character is actually named after one of my advanced readers who won a contest. It was a supporting character, but as the first book, The Oregon Pursuit was written, I fell in love with the character of Debbey and wanted her to have her own love story. Also, as I was looking through photos, I found the cover girl I used and knew instantly it was Debbey.

Oh, that is a really neat way to create a character and a love story all in one. How did the rest of characters develop to support Debbey?

They are friends of spin-off characters from my previous books in the series.

When you were developing the events in Debbey’s journey, were you inspired by events in your own life?

I’ve dealt with mean girls over the years and the aristocratic noblewomen of the London Season are a perfect example. I’ve been at events, parties, even church and felt like an outsider. It’s hard when you try your hardest and you still like you can’t fit in.

I agree that fitting in can be very hard, and sometimes you never feel like you fit in. Was the challenge of fitting the central idea that you wanted to share in Debbey’s tale, or do you feel that her journey is really trying to highlight something else?

I wanted the message that love can overcome anything, different backgrounds, challenges and other people interfering. If a couple stays true to each other, nothing else matters.

Awwww, I love that message! What have you learnt while crafting and delivering this message to your readership?

I learned that having a supportive family is so important. I’ve been sick off and on over the past month, and my oldest daughter and husband have helped out so much with the daily chores to allow me time to get my writing done.

I’m sorry to hear that you’ve been sick, and I hope that you’re well on the mend by now. It’s wonderful to see that you’ve had such lovely support from your family over this period. It’s always a tricky to write when you are sick, but when you are well, do you find that you are energised or exhausted by your writing?

Writing energizes me. It’s my outside life which intrude on my written world that exhausts me.

That outside life can be so noisy! Sometimes I don’t know why we can’t turn the rest of the world to mute to make it less exhasuting! Enough of the exhausting, let’s talk about something fun, like writing projects. What projects do you currently have in progress?

I just started a new multi-author series called The Lawkeepers which debuts on 2-8-18. I also have my first book in my WWI trilogy in Melissa Storm’s First Street Church kindle world that came out in November and the next one is releasing in March. I also just commissioned three more covers to be designed for the upcoming books in the new series, The Lawkeepers. Another historical, and excitingly, I will be writing my first contemporary romance which will release in May.

With so many different projects on the go, I’m curious to find out what you think about when you write. What is in the forefront of your mind?

I like to write complex characters and intriguing plots which when put together correctly, draws the reader in and holds their attention to the final word.

As you’ve continued to write, how has your approcached to find and develop something that holds the attention of the reader changed?

I think I am really finding what I like to write in combination with what readers want to read. Balancing it has been my focus lately.

Has this balance in turn changed your focus on your author brand or your thoughts about an author brand?

I think in the new market, authors have to be considerate of the author brand. I want to make a name for myself in the Christian romance genre and have readers know my books by my style and cover choices.

And as you continue to write and make your style more distince I’m sure you’ll have an ever increasing influx of readers to your author brand. But we can’t see all of the author behind the style with just these writing questions alone, we need to dig deeper with a few fun rapid-fire questions, starting with, if money doesn’t grow on trees then why do banks have branches?

To make us ponder this question…

It would not surprise me it this was a banking conspiracy!  Have you ever been on a literary pilgrimage?

My degree is in English literature, so I’ve spent years on one.

Yep, I think that counts as a pilgrimage. Can you cry underwater?

No – it just blends in

I wonder how tricky it is to change those bags without getting space dust everywhere. Why we ponder that, have you ever discovered why is a square meal served on round plates?

It’s good to have a little irony in life. What’s your favourite word?

Captivating-it can be used so many different ways

I love versitle words that you can pull out any use all over the place. Anything versitle is always a plus. I wonder if you can make a versitle monster. If you invented a monster what would it look like and what would you call it?

He turns the bat into a super hero.

Reverse super-powers, I love it! If you had the super power to create any new animal from mixing two animals together to great a super-hybrid, what new animal would you create?

A Tiphin would be a tiger and a dolphin mixed together and it would live in the water.

That is a creature that would launch an entirely new animal watching industry. I know I’d get on a boat to see a wild tiphin in action! We’ve covered everything from how you’ve workined on your author journey to the awesome-ness of tiphins, is there anything we’ve missed?

Coffee or tea? I’m a coffee girl-love it first think in the morning.

Oh, that’s a great suggestion, I’ve always gone for both coffee and tea, but you make a good point about the best beverage to start your day. Jenna, we’ve had a lovely catch-up today, and I hoping you could bring up full circle back to The Viscount’s Wife, with your personal favourite line from the novel.

Who doesn’t love a formidable woman! Jenna, thanks so much for returing to ItsWriteNow.com today with your book ‘The Viscount’s Wife’ and a new formidible woman inside, and I hope to catch up with you soon about another formidible woman you’ve bought to life in your next release.

Excited to read the book we discussed today? Find it here on Amazon: ‘The Viscount’s Wife ( ASIN: B078QXFKR6 )‘.

Want to find out more about Jenna Brandt? Connect here!