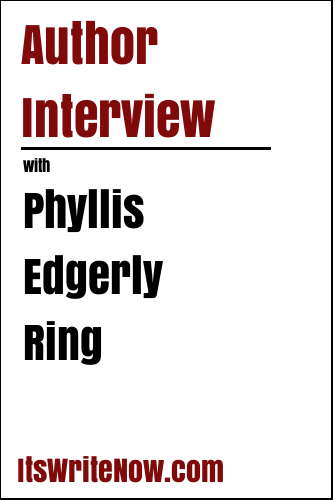 Anna Dahlberg grew up eating dinner under her father’s war-trophy portrait of Eva Braun. Fifty years after the war, she discovers what he never did—that her mother and Hitler’s mistress were friends. Plunged into the world of the “ordinary” Munich girl who was her mother’s confidante—and a tyrant’s lover—Anna uncovers long-buried secrets and finds her every belief about right and wrong challenged.

What will Anna unearth while exploring the origins of the war-trophy portrait? Phyllis Edgerly Ring has kindly agreed to guide us through the minefield of secrets and beliefs littered in the pages of ‘The Munich Girl’. Phyllis, what originally inspired you to craft a story about a portrait that turns into a journey to uncover World War II secrets?

My original intent was (and remained) to explore more about the lives of everyday Germans during World War II. When life led me to information about Eva Braun, it opened up whole new questions, particularly because she came from a background of everyday Germans – not what many would expect to be Hitler’s choice at all. When the question: “What if you had known Eva Braun, but hadn’t known the role she played in his life?” arose, the story’s momentum became unstoppable for me. A number of people actually did have this experience with her, didn’t find out the truth of her situation until after her death, because she was required to remain an invisible secret in Hitler’s life. That way, he could sustain the adulation he received through the myth that “his bride was Germany”.

Were there any aspects of your life that you drew upon as you began investigating the everyday Germans of World War II?

I spent a part of my childhood in Germany so it has a big place in my heart. I knew that if I wanted to understand its culture fully, I needed to understand more about its experience during the war.

The experiences of Germany through this period is really told through the characters that the readers meet during the book. How you breathe life into these characters?

The dynamic that each of the three women in the book experience, of never feeling that she can be fully herself – of having to choose between things, based on others’ views of her, is conditioning that overshadowed my own life for a long time. Today, I know that I experience my own power of choice more deeply as a result of the process of letting myself explore a potentially controversial or volatile subject like Hitler’s mistress in as neutral a way as possible, to see what sort of larger picture might emerge as this story unfolded for me.

You really are tackling a controversial or volatile subject in ‘The Munich Girl’. What did you want to give readers who were brave enough to explore this subject with you?

Initially, it was to give a glimpse into the experience of Germans during the war, and show how varied it was. Though they lived in a very dangerous place they could not necessarily escape, many Germans took risks to help and protect others, but many of these stories got lost once they were seen as part of the “losing enemy” country. Within the first year of writing, I also began to accept that the goal, to the best of my ability, was to convey themes that the story was suggesting. These include that any good we seek to do will always have an enduring effect, sometimes for successive generations. Another is that it is our willingness to build what is good, together, that is the legacy of love that always outlasts war, destruction, and violence.

What lessons that you learnt during this glimpse into wartime Germany that has endured in your mind?

One paradox that I think could tell us a lot about our present imbalances of inequality in our world is that the very sorts of caring, nurturing qualities that the Nazis sought to demean and suppress were exactly what Hitler came home to Eva Braun for. One question for me is, when, and how, will we find the collective will to value and honor these qualities in both genders, and all situations? It is the devaluing of them that has allowed, and continues to allow, violence and atrocities like the Holocaust to happen.

I admire your desire to explore and present things like this paradox in terms that people can understand and learn from, but I am curious to find how working in this sensitive situation has impacted your writing. Do you feel energised or exhausted working to ensure that you present this period well?

Sometimes the struggle is in making peace with the inescapable fact that every writing work has its own timetable. It’s directly related to the one connected with my own development, and it’s wise not to try to force or speed that up. What never fails to delight me is that I’m always happy when I let myself be absorbed in a project that attracts me, and it’s something I can pursue anywhere I am in the world.

We will return to ‘The Munich Girl’ in a minute, but since you’ve mentioned you’re always happy when absorbed in a writing project, can you give a little taste of what you’re happy working on right now?

A memoir-style work based on my experience with researching and writing The Munich Girl and some of the nearly inexplicable synchronicities that it brought. One of the most intriguing involved a phone call with information that proved vital to my research, but neither the other party nor I had dialled the phone. It just rang on both ends of the line and we each picked it up. And we had never been in contact prior to the call. That was pretty wild!

That is pretty wild! The world really is just waiting for you to answer the call! When you look back over the days you spent crafting your writing, what is generally at the forefront of your mind as you write?

My biggest personal strategy is guarding my time and energy when the writing process is especially active. That’s when I go into a retreating mode, as it asks for most everything I’ve got. And, honestly, I love the experience of it. Immersing in the absorbing atmosphere of writing, in cycles, helps me find and sustain balance in all areas of my life. It’s like something sacred, rather like work as worship, I guess.

Work as workship isn’t something that I’ve heard many writers describe, but if it helps you create and sustain balance, then perhaps it is a strategy other authors might consider pursuing. As promised, I want to return our thoughts to ‘The Munich Girl’, by sharing what you feel is important about this book.

The whole fact of Eva Braun as a character naturally brings a range of response. That includes those who connect, even empathize with her, those who connect with the story but struggle with connecting with her, and those who absolutely don’t want to connect with her, who object to her being there at all. I’ve been astonished when readers who I might not expect to easily relate to her – those whose families experienced huge losses during the Holocaust, for example – actually have a lot of empathy for what she reveals as a character. One editor asked early in the book’s process, “How are you going to get people past the fact it’s her?” I knew I wasn’t. Readers are either willing to go that distance or they’re not. It’s never been my intent to redeem her in any way, but rather for her to act as a motif for the self-suppression and repression that are still rampant in many lives. For me, she also represents that we are a mixture of strengths and character deficiencies, and we make a meaningful life through the choices we make in relation to those.

We really could chat about a meaningful life during complexities of Nazi Germany and World War II for hours, but I really want to entice readers to take their own time to work through these matters. What line do you feel best sums up ‘The Munich Girl’?

“Sometimes, we must outlast even what seems worse than we have imagined because we believe in the things that are good. So that there can be good things again.”

Phyllis, thanks so much for sharing a taste of good things in a time of darkness. Thank you for sharing ‘The Munich Girl’ with us today, and I hope that many new readers explore the secrets behind the portrait on the wall.

Excited to read the book we discussed today? Find it here on Amazon: ‘The Munich Girl ( ASIN: B01AC4FHI8 )‘.