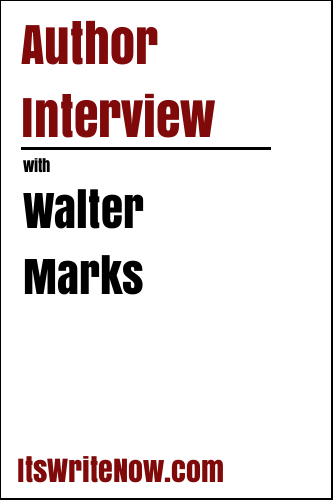 Tough, street-wise NYPD detective Neil Jericho, burnt out after years working violent homicide and drug cases in East Harlem, transfers to the police department of peaceful, posh East Hampton. “Death Hampton” is a murder mystery in which readers know, or think they know whodunit, while the detective does not. However, in the end, it turns out that nothing is as it seems.

Is the detective of ‘Death Hampton’ really in the dark about the murder mystery? Or does detective Jericho know more than he admits to? Walter Marks, the literary mind behind this murderous mystery has set aside a little time with me today to help me undercover whodunit. Walter, what inspired you to take a walk into the world of the NYPD in this book?

I have a house in East Hampton. I met a detective on the police force there who had formerly been with East Harlem (NY) homicide. I thought he’d be a good model for a detective story.

Meeting this detective in person would obviously give you a clear and strong starting point for your story. How did the rest of the cast of characters come to life around your detective?

By letting my imagination run wild.

Just my knowledge of the East Hampton area.

Even though your characters were visiting an area that you knew well, I’m sure you found yourself considering and exploring new thoughts and ideas. What do you feel was your biggest learning experience while writing this novel?

Go where your characters lead you.

And what did they lead you to? What message did they want you to share with your readers?

Nothing is as it seems.

Indeed nothing is as it seems, but I know that ‘Death Hampton’ is the first in a series, so I’m hoping that Neil Jericho has had some success uncovering the truth in his more recent adventures. What adventure is Neil currently embroiled in?

Book 5 of the Detective Jericho series. It’s called “Tumbling Down.” Others in the series are “The Battle of Jericho”, “The Hated, “A Man’s Partner”, “Amazing Detective” The new book deals with a murder in the LGBTQ community in the area.

For Neil’s sake, I hope that this new murder case is a little easier on him, but that’s no fun for either the readers or yourself as the author. When you consider writing in general, do you feel yourself energised by exploring these adventures, or exhausted by the volume of work that lies ahead?

What enlightening things circle around your mind as you write?

It’s hard to just do it with those warring ideas in your head. What steps has your writing taken to work through and past these conflicting ideas?

Has this focus on simplification extended to your self-publishing strategy?

I’m much less interested in making money than I am in reaching readers.

How has your journey to reach readers unfolded so far?

Writing fiction is a late-in-life career move. Here’s my cv: Walter Marks’ most recent theatre project, “Langston in Harlem” had a sold out, critically acclaimed run off-Broadway at Urban Stages Theater, and won four 2010 Audelco Awards for Excellence in Black Theater including Best Musical. The show is a musical theater piece based on the life and poetry of Langston Hughes, in which Mr. Marks set the Hughes poems to music, and co-wrote the libretto. His best known his song “I’ve Gotta be Me”, recorded by Sammy Davis, Michael Jackson, Tony Bennett, and many others. He has also written songs recorded by Barbra Streisand, Ella Fitzgerald, The Temptations, Della Reese, Liza Minelli, Little Anthony and the Imperials, and other artists. He wrote the songs for the Broadway musicals “Bajour” and “Golden Rainbow”, the book, music and lyrics for the off-Broadway musical “Body Shop”, the screenplay and songs for the motion picture “The Wild Party” (Merchant-Ivory Films – directed by James Ivory). He also wrote the off-Broadway comedy-mystery “The Butler Did It”. He has also written the songs and script for “Jack Johnson at Hubert’s Dime Museum and Flea Circus”, a show inspired by the life of the first black heavyweight champion of the world. On television, he won an Emmy award for his music on the PBS Series “Getting `On”, and wrote songs for the ABC series “That’s Life”, and the NBC Hallmark Hall of Fame production of “Pinocchio”.

Wow, those are diverse and creative projects, it feels a shame to have asked only asked you such banal questions about writing and authorship. But not to worry, we can fix that by tossing a few fun-filled fact finders into the mix starting with the curly conundrum, if money doesn’t grow on trees then why do banks have branches?

That’s the root of the problem.

There’s always another problem root to find. And I wonder if we can put our problem seeking roots to good use and find out if you cry underwater. Do you think someone could do that?

*Laughs* Of course it is! What’s your favourite word?

“favorite” without the “u”

I’m not really sure which spelling I personally prefer myself. The ‘u’ seems to give it a bit more mystique, but without is a bit more straight forward. It’s a tad too complex, so let’s go to an easier one with what is your zodiac sign?

He is a lovely lion. Lovely mane and roar, what else could you want from a lion? Maybe that’s something you can ponder when you could breed two animals together to defy the laws of nature. What new animal would you create?

Now that is an animal I want to see! But the one thing I think it is missing is the scary factor. We might need to create a monster to get a few more frights in flight. If you invented a monster what would it look like and what would you call it?

That would definitely get your heart pumping! We’re almost at the end of our heart-pumping exploration into your book, but before we declare this expedition complete, can you share your favourite mysterious line to get our minds turned to murder once more?

You did a bad thing.

Well, someone did do a bad thing, but who? We’ll have to pick up a copy of your novel to find out! Walter, thanks for chatting, and I hope that we’ve set a few hearts pumping when telling tales about the mysterious ‘Death Hampton’ today!

Want to find out more about Walter Marks? Connect here!