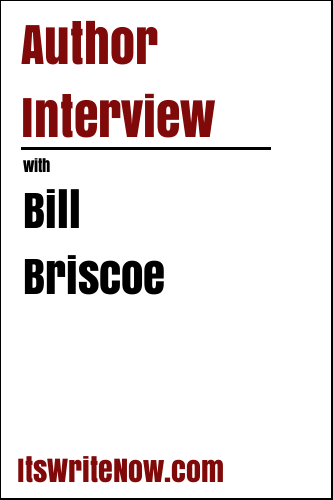 While Jim Pepperman deals with his father’s death, his mother moves the family from Texas to New Jersey just prior to Jim’s senior year of high school. Before he leaves Texas, Jim makes a promise on the spot where his dad died. He feels responsible for his mom and two little sisters, but stepping into his father’s shoes at seventeen is harder than he thought. Senior year is just the beginning of Jim’s dramatic, heart-wrenching, and humorous twenty-year journey.

Where will Jim’s journey lead? To find out, Bill Briscoe, author of ‘Pepperman’s Promise’ has kindly taken a few minutes from his busy day to chat with me about what’s in store for Jim in the first book in the Pepperman series. But first things first, what were the initial thoughts that led to Jim’s adventure Bill?

About five years before I retired I had an idea for a story. It was an image of a boy raised in the West Texas oil patch.

Once you had this image of a boy in Texas, how did he and the other characters come to life? Were there specific things that helped develop them?

Characters in my book center around people I grew up with. The names are different, but the personalities are similar.

Were the events that these characters encountered also borrowed or inspired from the period when you grew up?

Most of the story is fiction, but there are a few things that happened to me and some of my friends.

Even though it sounds simple, I’m sure it’s a challenge to pick and choose the events and characters that ended up in the series. Looking back what do you feel was the area where you learnt the most about turning your past into ‘Pepperman’s Promise’?

If you’ve never played golf and watched professionals play on T.V., it looks easy. The same thing is true when you read a good book. Well, neither of those first impressions is true. Writing a book is the hardest thing I’ve ever done.

But it was obviously enjoyable as this is only the first book in the series. What little taste can you share with us of either the upcoming titles in the Pepperman series or perhaps another project that you’re working on?

Pepperman’s Promise is contemporary fiction. I take the characters from this book to become protagonists in The Pepperman Mystery Series. Some of your favorite people will weave their way throughout the stories. Currently, I’m working on Book Two of The Pepperman Mystery Series. This book, Pepperman’s Promise, is the prequel to the series. Perplexity, Book One of the mystery series is available now.

Wow, you’re no doubt very busy with all of those projects on the go! And with all of those ‘Ps’ in the mix, it sounds like you have a good book naming strategy set out to at least keep all of the titles of your projects clear in your mind. Is this as far as you’ve gone with branding so far?

I’m branding my book with the cover images, and yes all the titles will start with P.

Consistency is a fantastic place to start when branding books. Bill, I know you’re very busy, so we’ll leave our chat here for today, but thank you for sharing a little life behind the scenes of ‘Pepperman’s Promise’.

Want to find out more about Bill Briscoe? Connect here!