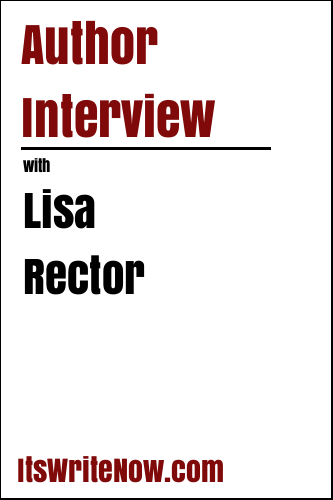 A malicious shadow trails Catrin and Meuric after they find themselves thrown back in time. Only Meuric knows the enormity of this evil that wants to claim Catrin. Meuric’s light could save her, but using it will diminish his dark power, hindering his ability to pass through the ether to their own time. Discovering the way home has just become the least of his problems . . . if there’s a way home at all.

Will Meuric be able to return home, or is he destined to live out the rest of his life outside of his own time? Lisa Rector, author of Half-Emrys: Master of Time, has kindly joined me today to see if we can unravel a few of the threads of time surrounding Meuric. Lisa, let’s start unravelling this tale from the start of the thread, what can you tell us about the original ideas behind the story?

It’s really about how the series began. I had a name. I knew I wanted my characters to have powers, so I created characters with the ability to harness darkness and light. I knew my series would focus on the half-emrys–each novel would highlight a different half-emrys, so when the third novel came around, I focused on the bad boy, Meuric. He’d had a minor role in the second novel. I wanted to showcase the unique gifts he had because of his dark power. They were all so different from the emrys of light.

With so many different abilities and characters in play, how did you find they developed?

As my worlds evolved, the characters merged naturally. Who could I throw in here to be a wrench for so and so? How could I make this person so they clashed with the other character? I’d feel personalities before I saw faces. I could feel how the characters fit into scenes. Fleshing them out was instinctual. And then they grew on the pages, always surprising me.

Looking back over your work, did you feel that the instincts that guided your characters were inspired, at least in part, by events in your own life?

The more I write, the more I realize every character is me, in an alternate world, or with an alternate personality. Meuric is who I would have been if I’d fallen through time if I had to fight the Dark Master and the darkness inside me. All the mistakes he makes, all the good he eventually does. Every time he fights with who he is and those around him. I would have done things exactly as he did.

As Meuric is an alternate form of yourself, I’d love to find out the central idea that he would want to share with the readers from the experiences and events from this tale?

That the darkness inside us doesn’t define us. Meuric doesn’t have a choice when he’s thrown back in time by the Dark Master. He fights with his darkness every step of the way, but the light’s always there inside him, even though it’s small and hiding. And he tries to ignore it. That’s how it is for us. We can ignore our light, but it’s there. And it’s amazing.

You know what, I think that your light is writing. With this idea in mind, do you feel that writing keeps you energised, or does it become overwhelming and exhausting at times?

Writing is what I crave right now. As soon as littlies leave to go to school, I’m pursuing all things writing. I love being in my fictional worlds.

I would imagine that with such a strong craving to write that you’re spending a fair bit of time in those fictional worlds improving your writing. What changes do you feel that you’ve seen in your writing as you’ve keep practising with your craft?

I’m learning that some of the most real and minute details can be the funniest. That’s where humor comes from. As I write, I’m more into the feel of the moment than when I used to write play-by-play interactions. My writing has become more real-life, and I think that evolved when I left my fantasy world for a while and wrote a contemporary romance.

I always find it interesting that many writers find the progression of their skills by taking a dive into a new genre. It must be something about exploring a new point of view that kicks imagination into high gear. When you started exploring contemporary romance, did you consciously think about how it tied together with your existing fantasy works under a single author brand?

I’m working on my own brand. No one knows it yet, but all my worlds, even my real worlds are connected by portals. The gist is that there are worlds beyond worlds and they are all connected. My emrys will come through to earth. My Vampires are from earth, but the demons they fight against are from another planet. My storm sprites live in their own world. I have a Lost Emrys series planned, and it will showcase this. Secretly, I’d like to believe that anything, even all the mythological stuff, is possible.

I’m positive that mythical things are possible too! As we both share this mindset, we have to dedicate our next few questions to exploring myth and magic! So, what mythical monster do you think you would create if you had the chance?

Werecat. A little kitten with wings.

Awwwwwwww, that sounds so cute. I’d love to meet the cat part of the animal, but I’m a little unsure about that ‘were’ part of the animal. You know what, I want to meet it. You’ll have to let me know where I can meet one of them! In the meantime, can you tell us what happens if Batman gets bitten by a vampire?

He’d have actual powers then, and he could stop pretending. And maybe he would finally get a girl.

Poor Batman, everyone picks on him, but I have to agree that he could probably do with some real powers. Batman might not have any real superpowers, but I think that one of yours is taking out your imagination to create interesting things. That means that I can’t let you go without letting seeing if you can add a quirky question. What quirky question do you think I should ask other authors in the future?

If you could make a house out of anything, what would it be made from? Bubble wrap. Although you’d have to keep guests with sharp things in their pockets from entering.

*Laughs* Bubble wrap is an awesome building material. I’m not sure I’d want to be in a bubble wrap house in a storm, but it would be nice and comfortable on a cool night! Lisa, I don’t think that I can keep your imagination away from your own series any longer, so I’d like to thank you for sharing a taste of the Emrys Chronicles with us, and I hope to hear about the next instalment in the series soon!

Excited to read the book we discussed today? Find it here on Amazon: ‘Half-Emrys: Master of Time (The Emrys Chronicles Book 3) ( ASIN: B01BYI5LNM )‘.

Want to find out more about Lisa Rector? Connect here!