Author interview with Maxime Trencavel of ‘The Matriarch Matrix’ 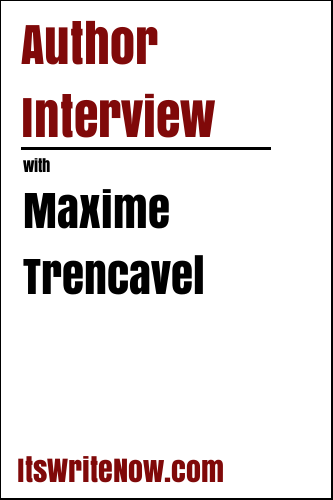 The world sits on the edge of the next world war. The US, Russian, and Chinese backed forces squaring off in the Black Sea. Only a mysterious legend from 9000 BCE will stop this war. Only the love of a Kurdish woman and her exact opposite from the other side of the world can solve this mysterious myth.

What mysterious legend from the past will stop a turbulent future? Maxime Trencavel, the mind behind the mystery, has kindly set aside a little time to guide us through the love of a woman and her opposite counterpart who define the pages of The Matriarch Matrix. Maxime, I have to admit I’m very intrigued to find out how a legend from so many years ago would have enough power to stop a modern-day war. What initially got you think about the kinds of ideas that lead to this book?

It began with an article on the world’s oldest religious sanctuary created 12,000 years ago. One had to wonder who built this monolithic site 6,000 years before the Giza pyramids. What on earth or not from earth inspired hunter-gathers to band together and build a temple? And what was the message they wanted to leave in the carvings across the giant monolith towers? And did their message transpire into our world today?

Those are some great questions, none of which I think I can answer for you now! Which such great questions being asked, I’m curious to find out if you drew on any events in your life to build up the plot, which events they were and why they were important?

Watching my daughters growing up. The intolerance and prejudices they encountered provided the backdrop for the morality of the story. For the protagonist, I studied the Kurdish culture and tragic history of oppression, torture, and genocide. Their story moved me so much, Zara who started as a secondary character became the protagonist.

What was the most important thing about Zara’s journey, and this tale in general that you really wanted readers to take away from following this mystery to its end?

I want to inspire readers to re-think the world, the past, and where we are going together. I believe for sanity sake we allow ourselves to be lulled into “safe” mental patterns which can lead us down paths that are not healthy for humanity. We judge very quickly and dismiss ideas, people, cultural differences. We can forget that we are more alike than different deep inside. This includes what we perceive as religious differences. In the ending chapters of The Matriarch Matrix, this is the lesson that the omnipotent oligarch Alexander Murometz tries to enlighten Peter Gollinger after Zara Khatum leaves. What is tolerance if not the open-mindedness to see below the surface, beyond the fear?

In The Matriarch Matrix, I lead readers down one path only to have the world turn on them. It is uncomforting for some, as we can read in the reviews, but I do this to help the reader breakthrough, to see the world just a little differently, and perhaps have a little more compassion for fellow humans in distant lands away or perhaps down the street. For some, it works. For others, it is just unsettling.

Are you working on a new book, to be read after The Matriarch Matrix to unsettle those whose feathers are ruffled?

Yes! I’m working on the sequel to The Matriarch Matrix. I jokingly told one of my alpha readers that I would name it The Matriarch Mamas. And she screamed, “No, you can’t do that!”

I purposely left loose ends in The Matriarch Matrix. Who really were the assassins chasing our protagonists? Were they Alexander’s goons? Were they a rebel Kurdish group? No, no, and no. You will be very surprised who. What happens to Zara and Peter? Will they truly be “man and woman together” for the salvation of mankind? And there’s Sister Magali reunited with Father Jean-Paul.

The story will travel to China, the Crimea, Russia, Israel, as well as revisit Zara’s homes in current day Turkey and Iraq.

And finally, we will come to understand what the object was and how it affected Zara and Peter. The god gene complex is only part of that story.

You know I agree a little with your Alpha reader. You can’t share the answers to all of the secrets, unless of course the answers result in even bigger questions and even more intrigue! As a lover of intrigue, I was hoping you could share one of your favourite lines from your book that will get our question gears turning.

“So many people want to, they need to villainize others. They need a clear bad guy who suffers the consequences of violating their morality. But isn’t this the essence of intolerance?”

Hhhhmmmm, that’s a great point, and it certaintly gets us questioning! Maxime, as much as I’d love to delve deeper into the mysteries of the past I know you have a busy day planned, so we’ll leave the interview here. Thanks again for sharing a taste of The Matriarch Matrix, and giving myself and the readers some questions to answer!

Excited to read the book we discussed today? Find it here on Amazon: ‘The Matriarch Matrix ( ASIN: B075R2DD4Y )‘.

Want to find out more about Maxime Trencavel? Connect here!