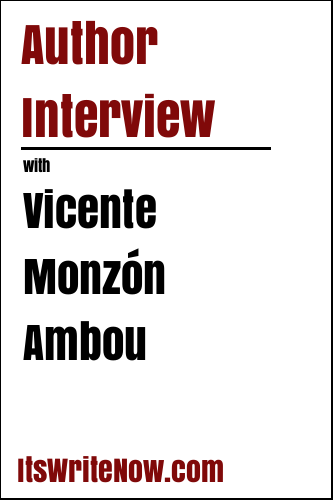 Desiderio Vigil, a retired lieutenant from the force of the Havana’s Criminal Police, faces up to a conscience case: a former classmate and friend of his sons — absent because of the exile, but present because of his yearning — had become a serial killer, a sort of “social purifier”, a Vigilante which victimizes the dregs of society in 1996’s Havana.

What will Desiderio discover as he delves into this conscience case before him? Vicente Monzón Ambou, the mind behind ‘The Secret Grievances’ has kindly set aside a little time today to explore the fictional landscape of Havana in the late 1990s. Vicente, can you tell us how this novel starts?

This book starts exactly from a title of a song: Yesterday (is its very first word), trying to be a hit of nostalgia.

They are some sort of “Dr Frankenstein’s monsters”, to which I tailored in parts: some have come from real persons, some others from cinema and the rest from my imagination. Authors have a pact with characters, they accept some things but reject others — after the deal, they stay as the reader finds them.

So, you’ve taken bits and pieces from people in your own life, and those you have seen in pop culture to create your characters. Have you used the same technique of taking aspects from many places to build the tale’s events, or are the events drawn from your own life?

Just from my own social environment, but not specifically from brutal actions or situations in my life.

Mountains of information about African Cuban culture and folklore (especially that of Abakuá’s Secret Sect), and the interesting tips about Havana’s underworld.

I haven’t come across many books about Havana’s underworld. Was sharing your knowledge of this world with readers the most important thing you wanted to communicate in this book? Or was there something greater to share than the life of those living in the underworld?

A sort of Hemingway expression: “A man can be defeated but not destroyed” (from “The Old man and the Sea” — about the Cuban fisherman). To picture the spiritual and physical renewal of man after his coming back from death — despite the fact that we are talking about a murderer.

Painting a picture for the reader of spiritual and physical renewal sounds like it would be a formidable challenge. Do you find that writing about things like this energizes or exhausts you?

Both. I feel depressed when something goes wrong, and happy when I hit something.

I’m glad to hear that writing makes you happy, so I hope that you can keep things from going wrong as much as possible. Are there any writing projects that you are currently working on that are making you happy? What are you working on?

On three novels of mine, originally written for radio, and I’m trying to set them up like books. Two biographical novels: about Edgar Allan Poe and Al Capone respectively, and a historical novel, about Canudos’ War (a bloody episode of Brazil’s history). Their titles are: The Nevermore’s Genius, The Papers of Al Capone and The Holy War of Belomonte.

Wow, that’s a huge amount of work that you’re currently working on! With so many writing projects in the works, do you find yourself continuously becoming a stronger writer?

I am writing since more than a quarter of a century. I’m now better writer than ever before — notwithstanding I suspect that some of my better tales I wouldn’t capable to do nowadays.

As you’ve been writing so long, have you ever considered developing your own author brand so readers can easily recognise your work, or is this something you’re yet to explore?

I’m just starting to try to create my own author brand. It is too soon to give an accurate answer about this thing. Creating and shaping an author brand is… is a war — and I am a soldier decided to fight.

Creating your own brand can certainly be a war, but I’m glad to hear that you’re prepared to fight! As much fun as the fight of author branding can be, I don’t think we should start it now. Instead, let’s have some alternative fun by playing with a few quirky quickfire questions. Let’s get it started with, if money doesn’t grow on trees then why do banks have branches?

The same way the frogmen don’t come from eggs.

Good point. But have you ever seen frogmen when they are little? Perhaps they really do come from eggs! Moving on, can you cry underwater?

Depending on the recipient: one small well will be overflowed with my tears.

I guess I never considered who you’re crying for influencing the production of tears. That’s a great point. You know you’re throwing out some awesome answers, so I’m hoping you have another fantastic response for my next line of inquiry if space is a vacuum, who changes the bags?

*Laughs* Fair enough! I hope you know more about eating than you do vacuums, so why is a square meal served on round plates?

There are square plates, too.

True. Perhaps a square meal is really only served on square plates, and those served on round plates just don’t cut it!  Oh, the next question is a good one, what’s your favourite word?

Is in Spanish. May I say it? Yes? Well, the word is Vital (wow –like in English).

You have to love those words that are so versatile that they’re the same across languages! It makes learning another language much easier. Earlier we talked about your characters kind of being like Frankenstein’s monsters. If you had to create a character that was all monster, what would it look like, and what would you call it?

Undoubtedly it would look like a woman (I adore monsters). And I simply call “it” Mary.

I’m not sure that monster would be all that scary. Creatures like vampires are probably scarier. Now that we’re thinking about vampires, what do you think would happen if Batman was bitten by a vampire?

He would eat “gazpacho” no longer.

Do you think that Batman eats a lot of gazpacho? I always pictured him as more a steak kind of man instead. But you never know, Batman might really love his tomatoes! I really love that answer, so I’m going to dig around for another creative question next to see if we can keep the creative juices flowing. Here’s a good one, if you could breed two animals together to create new animal would you make?

A horse and a parrot. To have someone to talk on the road.

*Laughs* Oh, I want one of those for a travelling companion, I think it would be great! Our next question is less creative, but still holds some interest, are you left or right-handed?

Right-handed — not like Obama or Paul McCartney and a lot of other celebrities.

Is Obama left-handed? You know I never really thought about it before, but it’s a nice fun fact to know. Vicente, it’s bee a lot of fun sharing fun facts, writing tips and peaking into The Secret Grievances, but I know that I have to let you go so that you can make progress on your new books. Thanks so much for chatting with me today, and I wish you the best of luck with the release of this book and your upcoming works!

Excited to read the book we discussed today? Find it here on Amazon: ‘The Secret Grievances ( ASIN: B07CVQ5YPZ )‘.