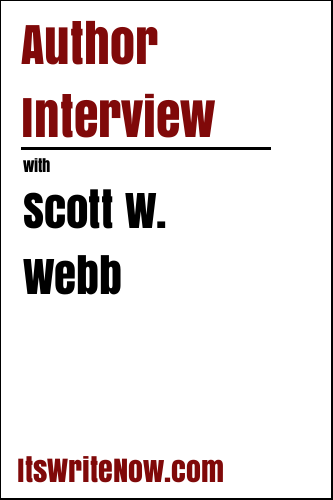 ‘White Anglo-Saxon Male on a Date’ is not about DATING exactly, but what a sixty-year-old man, me, learns from his 31-year-old son about “the art of picking up women.” I mean, the SUCCESSFUL art, which is not anything like the “older generation” would have a clue about. Anyway, this personal recounting ain’t long/dry like most books, so take a quick tour of one man’s transformational journey, not unlike the one YOU are on. To go on a date, isn’t personal growth what it’s all about? To practice being YOURSELF? Because if you can’t be yourself, why waste anybody’s time pretending to be somebody else?

Are you wasting time being someone else? Want to read about someone who has managed to transform themselves into, well themselves? Then look no further than the book of the hour ‘White Anglo-Saxon Male on a Date’, and its author Scott W. Webb who had spared a copy minutes to chat about the world of dating. Scott, what inspired you to write this book?

Normally my books take me six months to write. This one I scratched out in 3 weeks and I believe the voice is more FRESH and off-the-cuff. On my 60th birthday (April 15, 2018), my 31-year-old son took me to dinner and explained to me “the art of picking up women.” That one conversation changed my life, not just going into the future, but how I interpreted my life (as being lost in the Wonderful Dept.). I begin telling my story about post-college, moving to Kodiak Island, Alaska, running into a guy in a bar who challenges me to a “last man standing” drinking contest, and the rest of the story to age 60 just kinda fell into place.

From where I’m sitting it feels like there are a few more steps between that drinking contest and age 60, but we won’t get into too much of the in-between today otherwise it will give the book away and share too much of the interesting personalities you met like your drinking challenger. It does give the book away right, or have you added a dash of fiction to your story in those years?

This is autobiographical. My first character came to me only after I had written the first chapter and then he just popped into the story and was PERFECT to illustrate my relational ignorance. This guy I met in a bar in Kodiak, Alaska, and we shared the same nickname and when I told him that, he challenged me to a shot drinking contest to see who the real “nickname” was, and that created the character theme: Who are we really?

That is a really important question that we all have to answer for ourselves. When you were writing this book did you try and pull in specific examples from your life to clearly emphasize the importance of this question.

This entire story is my story. With all the education we receive, why are we still so stupid about “falling in love.” The opening quote is from the Beatles’ 8 Days a Week, “I loOoOve you,” which typifies the cultural ignorance in a nutshell. Simple protocol based on human desire and connection is pretty simple, so why not learn it, like now?

I think that’s a great idea! However, I think that there are a lot of people think things really need to be complex, difficult and might discard anything simple, which is such a shame because simple things are awesome! Did you find yourself learning anything surprisingly simple when you were developing this book?

My son read it and said: Don’t qualify yourself. So I took all of that out and just said what happened and this resulted in a much more FRESH voice.

What do you really hope that this fresh voice clearly tells the readers?

Our American culture trains us to be horrible at dating. The latest resources are amazing and anybody can be taught how to relate to the opposite sex in like one hour, which is how long this book takes to read.

An hour to improve your relations is not bad. Do you find yourself energised and highly fuelled to share ideas like this with your readers?

Writing I can do for hours on end. I get hungry, pour out a bowl of cold cereal, keep writing (while spooning the required fuel in).

Cereal really is the food of champions. Other than making sure the spoon hits its intended destination, what rolls around your head as you write?

I hope that you don’t manage to pick up any stray signals in your antennae form, as it’s never good to get words in a manuscript mixed up with alien communications. It makes for very slow reading, which means that you managed to keep the signals clear when you had ‘White Anglo-Saxon Male on a Date’ in the works. What writing projects do you currently have in the works?

Looking back, can you see that your writing has improved through the development of this book?

Yes. Two books I’ve written this past year I entirely hand drew and wrote. One is over 350 pages and I drew it just like I was a kid.

Two books this year is impressive! With a release rate like that, I’d be quite surprised if you hadn’t written anything else before. What have you written?

My most notable book is “Inside Poop,” published in 2006, about my experiences becoming a professional colon hygienist. The follow-up to that, “The Conspiracy Theory Diet,” about food conspiracy theory and new ways to think about food/farms. My third is “Intestinal Parasites and the Meaning of Life,” this one is free on my website www.colonicexpert.com with LOTS of pics of real live worms coming out from clients. Fourth is, “The Exquisite Donald Trump Down Through History” covers the history of the white Anglo-Saxon mind from present to the year 50 BCE. And finally, my fifth book “The Magic of Glinda,” an in-depth review of The Wizard of Oz movie.

Wow, you have been busy! It’s pretty clear that there are some clear threads tying your earlier works together, while your later books are taking a different direction. As you look back on your work, have you seen these threads and tried to get an author brand going so that it was clear for readers too?

Yes, I have done zero promoting, just getting certain things down for posterity. Most of my books are on health topics and I imagine them getting discovered one day like a Vincent Van Gogh painting found in somebody’s attic. I love the voice in Catcher in the Rye and The Moviegoer, by Walker Percy. Lots of writers will try to imitate it. I think my latest book captures my true voice because I wrote it in 3 weeks, just spilled out, and I had almost no control of what came out on the page and then I would read back and wonder: You wrote that?!

Well, if you’re going to write you need to get some feedback like that! What is your favourite line from this book that you think might cause someone to say ‘You wrote that’?

Heavy shallow breathing, mine, alone, in a state of shock.

Interesting…interesting. I’m not in a state of shock yet, but let’s see if we can both be shocked by our next set of fun and questions from the quick-fire set. The first one however probably isn’t going to induce much shock at all. Have you ever been on a literary pilgrimage?

Yes, I read On the Road by Jack Kerouac at age 22, went on the road for 6 months across the West Coast states, sometimes sleeping in my car or next to it. (A good sleeping bag comes in handy if you ever were to read On the Road.) And I’ve been to Thomas Wolfe’s boyhood home in Asheville. I kicked up a brick from the sidewalk in front of the house, snuck away with it, and kiss it every night before I go to bed.

*Laughs* I hope the brick was actually from the house and not just dropped there the day before! Okay, so what’s your opinion on this – if money doesn’t grow on trees then why do banks have branches?

This is probably a better question for the inventor of Bitcoin.

I’ll see if I can get in contact with him so I can ask him. If space is a vacuum, who changes the bags?

I’m glad he gets Sunday off too. Why is a square meal served on round plates?

I tend to drink smoothies from a rectangular glass so what’s that?

Is that a smooth meal instead? Okay, if you invented a monster what would it look like and what would you call it?

I have invented many monsters and I’d call it kinda routine.

You must have a decent catalogue of created monsters then! Since we’re not creating anything new, let’s move towards supernatural speculation. What do you think happens if Batman gets bitten by a vampire?

Can he get any battier? Are you left or right-handed?

Right, but I’ve been known to write with my left when I’m sleepy, you know like it lecture halls or boring meetings and conferences to keep myself awake because sleeping in chairs isn’t as comfortable as I would like. And like those chairs, there’s not a lot of comfort in my next question, if you could breed two animals together what new animal would you create?

A cow with a chicken so I could get grass fed eggs.

*Laughs* I wonder if you can taste the difference. I think you need to explore this idea more so we can try out those eggs! You know, I’ve run out of quirky questions, but do have any quirky ones that you think I should roll into my question rotation.

At what point did you become an adult?

*Laughs* Alright so, at what point did you become an adult?

*Laughs* Congratulations on you reaching adulthood! And with that, I think we might leave the interview there today so that you can celebrate your adulthood. Scott, thanks for sharing ‘White Anglo-Saxon Male on a Date’ with us, and I hope that you’re able to help those wanting to succeed at dating.

Excited to read the book we discussed today? Find it here on Amazon: ‘White Anglo-Saxon Male on a Date ( ASIN: ASIN: B07D5ZTVJM )‘.