Melanie Davis is alive but not really living. Years ago, she faced an unspeakable tragedy that left her crippled socially. Her life consists of her career and coming home to an empty house devoid of love. That all changes when she meets a mysterious stranger. One who’s a dead ringer for the deceased lead singer of her favorite rock band, Lush.

Caesar Blue died in a tragic accident when he was twenty-eight. The gorgeous music superstar left behind a lucrative career and three bandmates who were devastated by his death. None more so than his best friend, Johnnie Vega.

Drummer Johnnie Vega always had a weakness for drugs and alcohol, and after losing his best friend, his world spun out of control. No matter how many trips to rehab he makes, Johnnie can’t shake the guilt over his friend’s death, nor the addiction he struggles with.

When Melanie realizes Caesar Blue has indeed returned to the world of the living, she finds herself falling for the enigmatic rock star. Not only does he set her on a path to fulfill her lifelong dreams, but his disarming sexuality reignites passions she long ago buried. But when Caesar’s mission to help her brings her face to face with her favorite band member, Johnnie Vega, things get complicated. As she begins to fall under the spell of her teenage crush, she discovers she and johnnie have a mysterious connection. One that compelled Caesar to bring the two of them together. But can falling in love with a ghost and his addict best friend be a good thing? 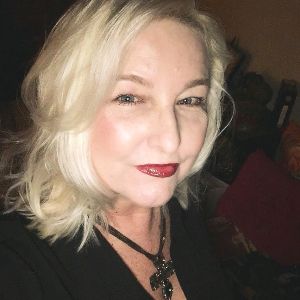 As a child, Cherié Summers, dreamed of being a writer. And it’s in her dreams that Ms. Summers finds inspiration. At age eighteen, a dream she had about her favorite rock star, Billy Idol, turned into her first novel, A Melody for Adrian. But, Ms. Summers didn’t get serious about publishing that novel until she turned fifty. Six years later, she has seven published books to her name.

A Melody for Adrian begins her Love on Fire series which she describes as “drama filled, erotic romance about love, sex, friendship, and rock and roll”. Thus far, there are five books in the series that chronicle the trials, tribulations, and romances of the fictional band, Lightning. For the book, Eternally Wild, Ms. Summers veered away from her first series to take a stab at paranormal romance. However, the book is still grounded in music. The inspiration for Eternally Wild also came from a dream. One in which Ms. Summers met the ghost of Michael Hutchence. She was compelled to begin writing the book on the 20th anniversary of his death and is thrilled with the outcome, calling it her “steamiest” creation to date. In 2019, she released a sequel to the book called Heaven Sent. “I thought Eternally Wild would be a one book adventure, but the more I thought about it, the more I felt Johnnie’s story needed to be told. When Michael Hutchence once again appeared in my dreams, I knew it was time to write book 2, in the Love and Lush series.”

Writing is only one of Ms. Summers’ creative passions. She is also an avid photographer, specializing in portrait photography of animals, nature, and people. Another creative outlet she revels in is belly dancing. She teaches the art of Middle Eastern dance through her local community education program. She also enjoys traveling to music concerts and pop culture conventions with her daughter, Kayla. Atlanta is a favorite destination, and Ms. Summers’ dream is to move there when she retires from her day job.