Elijah Wadsworth lost his parents and twin sister in what he thought was little more than a tragic accident. But five years later, when Elijah begins manifesting strange abilities–which he neither understands nor can control–he discovers his family has been at the center of a cosmic battle for centuries… and his family’s death was likely no accident at all. A mysterious “girl in black” with dark, magical abilities pursues him, hoping to lure him to her cause.  After coming into possession of a mystical stone, which transports Elijah into his deceased father’s ancient memories, Elijah and his closest friends must discover the source of his power together lest his newfound abilities drain his very soul, and open up our world to the blight of Samhuinn. When a girl he loves, however, is threatened he must make a choice to either save her by joining the sorceress, the “girl in black,”  or save the world.

The Tree of Life—the source of Elijah’s power—is failing. Creatures from Samhuinn are breaking through the veil and terrorizing St. Louis. As the Tree weakens, Elijah’s abilities are failing. Will Elijah be able to stop the incursions before his powers fade completely?

Elijah’s Ovate—Tyler—is visited by a strange, but alluring, princess from Annwn. He’s immediately captivated by her–but Elijah fears the princess has ulterior motives. Is the princess who she claims to be, or is she another pawn in the Morrigan’s scheme? The cosmic struggle between Elijah, his Order, and the Morrigan and her legions comes to a head in the final installment of the Gates of Eden: the Druid Legacy Trilogy.

Readers of Theophilus Monroe’s Voodoo Academy from the Gates of Eden: The Voodoo Legacy will naturally adore the Druid Legacy. Combined with Celtic mythology and Arthurian lore, this druid urban fantasy is a compelling installment in the Gates of Eden world. With magical fantasy adventure romance, a snarky male hero, and a plethora of characters taken straight from Arthurain lore and the Celtic world of myth, this time travel epic fantasy will keep readers enthralled from start to finish.

Theophilus Monroe is a fantasy author with a knack for real-life characters whose supernatural experiences speak to the pangs of ordinary life. After earning his Ph.D. in Theology, he decided that academic treatises that no one will read (beyond other academics) was a dull way to spend his life. So, he began using his background in religious studies to create new worlds and forms of magic-informed by religious myths, ancient and modern-that would intrigue readers, inspire imaginations, and speak to real-world problems in fantastical ways.

When Theophilus isn’t exploring one of his fantasy lands, he is probably playing with one of his three sons, or pumping iron in his home-gym, which is currently located in a 40-foot shipping container.

He makes his online home at www.theophilusmonroe.com. 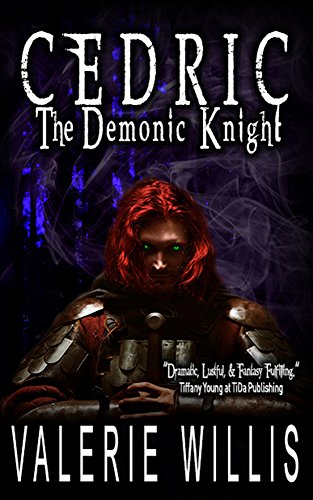 A Fantasy Romance Series for Adults that is Percy Jackson all grown-up and a mixture of Vikings meets Trueblood!

Known for hunting the supernatural, no mortal man realizes Lord Cedric is one of Sorceress Morrighan’s abominations. After competing in a tournament, he is wed to a Lady of the Court, Angeline. Cedric’s senses begin to overwhelm him and he struggles to decipher his feelings; Are they a creation of his incubine bloodline or truly heartfelt emotions for the girl who has lost it all to him? He finds himself forced to choose between falling in love or continuing his suicidal quest to kill his creator. Epic battles against all manners of beasts and demons fill this story with memorable antagonists such as Morrighan and her two sisters; Romasanta the Father of Werewolves; Succubus Queen Lillith and many more. Find yourself engulfed in lores and history long forgotten from the 12th Century and beyond.

“It kidnaps you in a world full of darkness, blood and war and yet you don’t want to leave.” Gluckskind, 3 Degrees of Fiction

“A mix of Arthurian fantasy mixed with demons and witchcraft with a sprinkle of sex and romance.” Lulu, RoadsideReader

“A healthy dose of romance, battle, a mystery to solve and best of all it was very different from your usual paranormal book.” Ramona Plant, Book Reviewer

“Equal parts character building and action scenes, the intensity does not waver, nor do the love elements distract from the narrative.” Ross Ellison, Book Review & Blogger