Skip to content
How can you be totally, absolutely, completely, brutally honest when you can’t even admit the truth to yourself? It’s much easier for Charlie Sands to hide behind the lie she’s told herself since the day she met Greyson: the guy every girl wants could never love a smartass tomboy like her. Although Greyson Steel is a best friend worthy of Charlie, he knows she deserves a boyfriend who is a match for her lightning fast mind and strong enough not to let anxiety rule his world. And that guy? That could never be him. But when they both start blowing past the protective walls they’ve erected over the years, can they handle love’s honesty or will they crumble like a sandcastle at high tide? In this angsty, friend-to-lovers romance about a brilliant, surfing tomboy and her anxious, fireman best-friend, Erin Spineto, author of Islands and Insulin, spins another “Inspiring tale of being just the right balance of strong and vulnerable.” You’ll love the hilarious, double-dating summer goal, breezy escape to the beaches of San Diego and Maui, and fantastic group of friends. California Promises is the first in the Warrior Women Series, a RomCom series full of female surfers who happen to have diabetes and other autoimmune issues and the men who are strong enough to be with a warrior woman. This is an #ownvoices story for its portrayal of type 1 diabetes by an author with type 1 diabetes.

Erin Spineto started her writing journey in 2011 with Islands and Insulin, her memoir of sailing solo 100 miles down the Florida Keys with type 1 diabetes back in a time when doctors were foolish enough to recommend against this kind of wild adventure with diabetes. She followed it up a few years later with Adventure On, a nonfiction book on using adventure to increase motivation to take care of chronic conditions like diabetes. Since then she has moved on to fiction and is currently working on Warrior Women, a three-book angsty RomCom series full of female surfers who happen to have diabetes and other autoimmune issues. Erin’s journey with autoimmune conditions started in 1996 with type 1 diabetes. She added hyperthyroidism to the mix in 2007, and has rounded out her collection with a little Anti-Synthetase Syndrome, which she thinks is so appropriately abbreviated ASS. Not letting anything slow her down, Erin is also a long-distance endurance adventurer and autoimmune advocate who uses stories to encourage others with chronic illness to go big. Erin started surfing at age five when she stood up on her boogie board and realized waves were so much more fun to ride standing up. Since then she has had a love affair with empty beaches, warm water, and a post-surf lunch of fish tacos and Diet Dr Pepper (though she’s had to give that up to fight the ASS) eaten on a patio in the sun with her own real life hero, Tony, and their two surfing teenagers.
Website : https://Seapeptide.com
Travel to Greece and fall in love with this feel-good romantic comedy!

Living in Greece and writing romantic comedies, one coffee at a time!
Website : https://joyskye.com/
National bestselling author Rosie Genova reprises her tasty Italian Kitchen Mysteries for a new audience New Jersey Monthly calls The Wedding Soup Murder “a tightly-plotted whodunit” A wedding with all the trimmings—and death as an unexpected guest… Victoria Rienzi came home to the Jersey shore to research a new book and perfect her cooking skills at her family’s seaside restaurant, the Casa Lido. But when Vic’s exacting nonna puts her in charge of catering the soup course for a wedding at the exclusive Belmont Country Club, it’s not long before trouble is simmering in the kitchen. Three temperamental chefs are butting heads, their sous chefs are throwing punches, and the formidable club president, Elizabeth Merriman, antagonizes everyone around her. Elizabeth, aka “The Iron Lady,” has made her share of enemies, including the father of the bride, who was caught embezzling from the country club. She threatens to fire the famous pastry chef in charge of the wedding cake, who doesn’t bother to hide her hatred of Elizabeth. And who is the mystery man in dark glasses, who never leaves the older woman’s side? Though the wedding goes off without a hitch, by the time the happy couple and their guests depart, Elizabeth Merriman is missing. When her body is found on the beach the next morning, it appears that the country club president slipped from the top of the seawall, but Vic isn’t convinced. Did The Iron Lady finally push someone too far? And did that someone push her back—into the arms of death? Recipes included!

Bestselling and award-winning author Rosie Genova left her heart at the shore, which serves as the setting for much of her work. The inspiration for her cozy series, the Italian Kitchen Mysteries, comes from her deep appreciation for Italian food, her affinity for the New Jersey seaside, and her love of classic mysteries from Nancy Drew to Miss Marple. A former journalist and teacher, Rosie also writes women’s fiction and suspense. The proud mama of three grown sons, she still lives in her favorite state with her husband and a charming mutt named Lucy.
Website : http://www.rosiegenova.com
D.I. Fierce always gets his man, but can he get his woman?

He is sick of his life both on and off screen. Leaping at an opportunity to escape to a villa in Croatia, he finds himself impossibly tempted by his sassy concierge.

The last thing Isabella needs is another demanding, oddball, B-list celebrity as a guest. Especially one as grumpy as Leonard, no matter how attractive he is.

Can he conquer his fears and risk trusting someone else with his heart after last time?

Joy lives on the seductive island of Corfu with her four dogs and an embarrassing number of cats.

Her many years working in the tourist industry on this sunny isle and her love of all things literary inspired her first novel which recently hit the #1 spot in Greek Travel much to her delight.

She loves to cook, dance and drink wine, usually at the same time, and is currently working on book number four, due to be released later this year.

She also loves to travel, absolutely anywhere, and is looking forward to jumping on a plane!

Hazel Phillips plans everything, so why not a summer fling? She has a good life- a perfect job and great friends. Only one thing is missing- a little meaningless fun. Her sexy new neighbor with six-pack abs might be just what she’s looking for…

When Leo Chapman moves into the Greenview fourplex, he only wants to save money on rent. He doesn’t expect his hot new neighbor to give him an offer he can’t refuse. A summer fling, no strings attached. It’s every guy’s dream, right? It should be. But the sweet, feisty librarian makes him happier than he’s been in years. Too bad she put an end date on their relationship…

NOTE FROM THE AUTHOR: There are a few steamy scenes 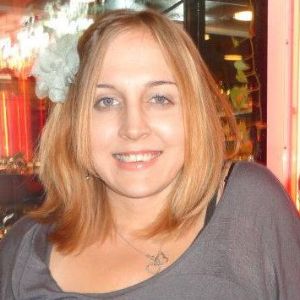 Juliana Stevens is close with her family and grew up in a small town outside Austin. Her favorite pastime is going to the beach and spent many summers in Rockport and Port Aransas, Texas growing up.
She used to write short stories for her friends in middle school and has been an avid reader since elementary.
She lives in Texas with her husband, three kids, and three dogs.