As a teen, he moved to Florida and that’s where his creativity took off. In his first couple of days in a new school, he was approached by a classmate who asked did he know how to rap? He answered no, but the classmate replied by saying I’ll show you. Cedrick began to write raps which back in the eighties was more like stories and much different than it is today. He wrote the story and the classmate rearranged the words and organized them into rap lyrics and from there he just couldn’t put the pen down. After the classmate moved away, Cedrick kept on writing stories and turned them into rap lyrics even though he couldn’t rap to save his life.

Life happened and he put away his pen to provide for his family but the stories swimming around in his head wouldn’t go away. Even though he was busy with work and taking care of his family, he made sure that he made time to write. He wrote a ton of scripts and entered a few screenwriting contests, but he realized to make it in Hollywood you’d more than likely would have to move there and would be a lot more difficult to get in the door. His wife kept telling him for years to write books instead but he didn’t think he was cut out to be an author in that capacity.

A life altering event plus the fact that he’s not getting any younger finally caused him to take the plunge.

College student Kyle Falconer’s trip to New York City gets a bloody extension when his Christian group is brutally murdered by vampires. Now undead himself, Kyle is taken in by a sympathetic woman with the ability to see the future, and she begins training him to defend himself against the madman who slaughtered his friends. With a holy war looming on the horizon, Kyle must gather allies to save the world while also dealing with Vatican vampire hunters and the undead Yakuza. 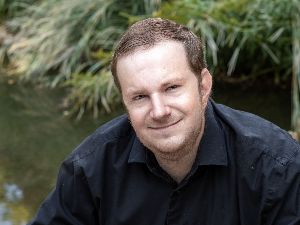 Scott Kinkade lives in Oklahoma where he struggles to put words to paper. He graduated from Oklahoma Christian University with a BA in Arts. His major was English/Writing. He enjoys reading, writing, TV, anime, video games, and comic books/manga. He has an unhealthy interest in history which is sure to get him in trouble one day.