The Murray of Letho Box Set:
Death in a Scarlet Gown: Young Charles Murray, a student at St. Andrews University, finds an unpopular lecturer dead – but that’s not all that’s been happening in this quiet coastal town.
Knowledge of Sins Past: Estranged from his father, Murray is taken on as secretary by eccentric Lord Scoggie, but all kinds of tensions in the village lead to kidnapping and death.
Service of the Heir – An Edinburgh Murder: Returning to the capital, Murray is sucked into a world of corruption and confusion involving his own father.

Lexie Conyngham is a historian living in the shadow of the Highlands. Her Murray of Letho and Hippolyta Napier novels are born of a life amidst Scotland’s old cities, ancient universities and hidden-away aristocratic estates, but she has written since the day she found out that people were allowed to do such a thing. Beyond teaching and research, her days are spent with wool, wild allotments and a wee bit of whisky.

A strange ability. A discovered corpse. But will his supernatural sleuthing skills lead him into a killer’s trap?

England, 1990. Reed has travelled his whole life in search of someone who understands him. So he’s thrilled when his journey brings him to free-spirited Zoya, who shares his rare ability to dream-walk. But after his gift leads him to a hidden corpse, he becomes the prime suspect in the murder.

Despite the setback, Reed resolves to use his power to help crack the case.

When the real perpetrator delivers a violent threat, he’s tempted to give up, slip into his camper van and hit the road again. After all, who would miss him?

Will Reed flee the tiny seaside town and abandon his new friends – or will he risk everything to expose the murderer?

The Invisible Body is the first book of The Falling Awake Mysteries, a captivating, character-led series that blends amateur sleuth crime story with an exploration of human connection. If you like compelling characters, seaside settings and a hint of the paranormal, then you’ll love Jenny Cutts’ intriguing novel.

Buy The Invisible Body and unravel the mystery today.

Jenny Cutts is the author of The Falling Awake Mysteries, a sophisticated cozy mystery series set in the UK. A literature graduate and former archivist with a passion for cinema, she punctuates her writing time by watching the city bustling below her window and gazing at the big skies rolling above. 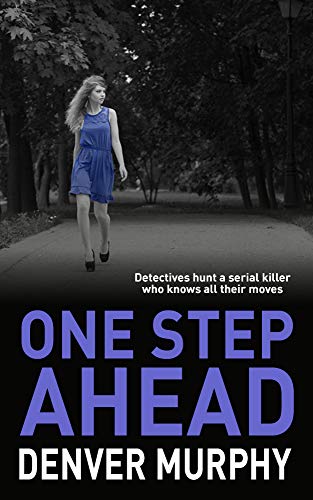 An embittered and disillusioned policeman takes revenge on society in this unputdownable serial killer thriller.

Retired from the force, Detective Superintendent Jeffrey Brandt goes native. He stabs a woman but holds back from killing her. Frustrated that no one takes any notice, he ups his game. Next time, he’ll kill.

Brandt fully knows how the police work. He’ll use this knowledge to win a sick game; after all, he’s chosen the rules.

The crime scenes are spotless, Brandt’s covered his tracks. There is no forensic evidence. Yet each killing has his unmistakable print.

Faced with the challenge of discovering his identity is DCI Stella Johnson. Quick-witted and uncompromising, she rises to Brandt’s macabre challenge. But if she finds the killer, what will she do given that he is always one step ahead?

Who will win this mortal battle of wits between hunter and hunted?

ONE STEP AHEAD is the first book in a trilogy featuring DSI Brandt and DCI Johnson. It is set in Nottingham and further afield in England.

Look out for the two other books HIDE AND SEEK and SMOKE AND MIRRORS, both FREE with Kindle Unlimited and available in paperback.

If you like thrillers with meat on the bones, get stuck in to this binge-worthy series now!