No trace: good. No way of following her.
Lt. George Murray needs his brother Charles’ help. One of his fellow officers has not heard from his wife in Edinburgh for several weeks, and he’s worried. George would go himself but Charles is only in Fife and besides, George is waiting in Belgium while a small man named Bonaparte, newly back from Elba, decides whether or not to leave Paris and fight.
But what Charles Murray finds out in Edinburgh will not be straightforward, and in the end both brothers’ lives will be in danger, in more ways than one.

Lexie Conyngham is a historian living in the shadow of the Highlands. Her Murray of Letho novels are born of a life amidst Scotland’s old cities, ancient universities and hidden-away aristocratic estates, but she has written since the day she found out that people were allowed to do such a thing. Beyond teaching and research, her days are spent with wool, wild allotments and a wee bit of whisky.

One torturous night of pain, fear, and uncertainty forces a decorated police officer to leverage all his training to determine the connection between a home invasion and his past.

When the case of a missing girl goes cold, veteran detective Jerry Bishop quits his job at Boston PD when the loss proves to be too much. With a new career and his loving wife by his side, it seemed nothing could go wrong with their perfect life. Until the night the doorbell rang.

Answering the bell in the middle of the night proves to be a grave mistake, as a night of terror ensues for the couple.

Jerry must dust off his training and detective skills to get beyond the scope of his past inclinations. But will it be enough to protect his wife and accomplish his new mission?

The Night the Doorbell Rang is a suspense thriller – a page-turner filled with action, twists, and a dash of
horror. Not only will readers be taken on a seat-gripping, jaw-dropping journey into the minds and lives
of cops and killers, but they will be challenged to decide where the line is drawn.

Pick up The Night the Doorbell Rang to find out what happens next. 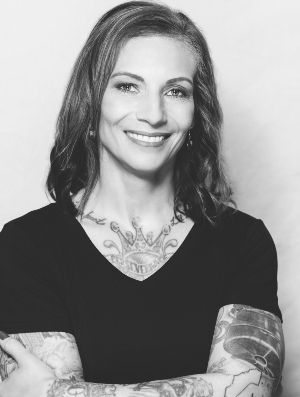 Chalon J. Harris is a U.S. Army Combat Veteran, Life Coach, and Police Officer. She has traveled to twenty-three countries and forty-five U.S. states thus far. When she is not playing her bass guitar or riding her Harley Davidson, you can find her in the gym, the mountains, or binge watching her favorite horror movies. Her passion is promoting self-care and coaching through www.selflesslyselfishselfcare.com. She is the author of the newly released crime thriller, The Night the Doorbell Rang. Originally from the East Coast, Chalon currently lives in California where she is working on her next book.

If you love reading about drug cartel wars, crooked cops, and assassins, SETH is an action-filled book on a Marine’s vigilante justice. Staff Sergeant Seth Collins wasn’t your typical Marine. A member of the elite Marine Corps Force Recon, he had a Navy Cross on his chest and six combat deployments under his belt. Called home to care for his ailing father, he became a Hillsdale police officer. Seth needed to quit and escape from the memories of Marines killed fighting the president’s politically correct wars. Fate had a different plan. The Mexican Los Guerreros and Halcon Cartels declared war against each other for control of the drug trade. Hillsdale was ground zero. Police officers selling drugs threatened Collins father. Big mistake. Seth tossed political correctness out the window. He fought back like one pissed-off Marine.

JB Morris, international bestselling author of SETH, has received multiple awards for writing excellence and is author of the sweeping new thriller, THE BEIJING MEMORANDUM.

From a USA TODAY bestselling author! It was a random crime on a dark Beverly Hills street. Or were the victims targeted?

When an old friend from high school shows up in P.I. Burnside’s office for help, neither have any idea that this case will spiral into fraud, kidnapping and murder. But as Burnside begins looking into his friend’s beautiful celebrity daughter, he uncovers more and more people who have a dispute with her – and a reason to inflict harm.

Once again, Burnside’s investigation takes readers on a harrowing journey through the best and worst of Los Angeles. Burnside navigates his way with a little help from some pro football players and is forced to work around detectives from multiple police departments, who would prefer this case would just go away. And as he unravels the mystery, he and his wife Gail must make a critical decision on their future. The series reaches uncharted territory when Burnside gets a legendary meeting with the LAPD’s Chief of Police – an interaction the Chief would like to forget!

The 10th book in the Burnside Mystery series is smoothly written and is a joy to read. The story builds to a pulsating climax, and will leave the reader hungry for more!

Before he had a chance to blink, she flipped the youth over and tossed him onto the grass, pinning him there with her knee

A Dusty Kent mystery by an Amazon Best Selling author!

When a popular young woman is strangled in her home in the seaside village of Murloo, the residents are sure an itinerant surfer who disappeared after the murder is the killer. However, one year later the surfer is still missing and the killer’s identity remains a mystery.

The victim’s family call in investigative journalist Dusty Kent who has an impeccable record in solving the cold cases she writes about. Dusty’s determination to investigate unresolved crime is fuelled by a personal connection through her own family tragedy. However, this case tests Dusty to the limit and she despairs of ever catching the callous killer who seems to be lurking nearby and yet…

A gripping mystery imbued with the ambience of Australia—from the mysterious wood carving found with the body, the captivating characters of a small town, to the coastal splendour of the Southern Ocean.

Murder in Murloo is the first book in this Australian murder mystery series introducing amateur sleuth Dusty Kent who returns to the beach town where she grew up. The novel is written by JB Rowley, author of Amazon best seller Whisper My Secret, under the pen name Brigid George.

He stirs up trouble just by rolling into town. Can this human wrecking ball on the run dodge the Federal police and a Russian crime syndicate bent on revenge?

Gary Braswell is a walking disaster. Dodging his violent enemies with new papers and the help of a surgeon’s knife, Gary attempts to lie low with a stint in freezing Tasmania. But he’s barely settled in with his stolen $150,000 stash when a body-building thief snatches the cash… and then turns up bloodily dismembered.

When Gary is fingered for the killing, he’s terrified he’ll blow his highly illegal history wide open. And since Australia’s most-wanted man is desperate to avoid a stretch in the slammer, this true-blue criminal better knuckle down quickly before he gets nailed.

Will the knockabout party animal escape the cuffs and dodge a snowstorm of strife?

Sold to the Devil is the gritty second book in a fast-paced comic noir thriller series. If you like hilarious page-turners, screwball characters, and crazy twists and turns, then you’ll love Blair Denholm’s high-powered sucker punch.

Buy Sold to the Devil to join Trouble Down Under today!

Pay up or die!

Used-car salesman Gary Braswell owes thousands to a violent loan shark. Desperate to save his skin, he joins forces with a ruthless Russian crime syndicate that doesn’t take too kindly to being double-crossed. As his life spirals further out of control, Gary’s inflated ego can only land him in more trouble.

A whirlpool of murder, sex, drugs and real estate, SOLD is hilarious and dark

The Gold Coast swelters in record temperatures, and car salesman Gary Braswell’s hot under the collar. With sales at rock-bottom, he’s up to his neck in debt to loan shark Jocko Mackenzie. If the loan’s not repaid, there’s more than Gary’s kneecaps at stake – his long-suffering wife is also in peril.

Gary turns his skills to real estate and is soon embroiled in the murky world of money laundering. With the federal police sniffing around and Jocko on his tail, Gary concocts an audacious scam.

Success means money – lots of it. Failure means death. Can hard-drinking, cocaine-snorting Gary pull it off?

If you enjoy noir novels by Irvine Welsh and James Ellroy, the absurd humor of Tom Sharpe and Joseph Heller, and the story-telling of Elmore Leonard and Janet Evanovich, you’re going to get a huge kick out of SOLD

William Black may be the first racketeer to ever hit Las Vegas. He isn’t content “puddling mud,” or pouring Hoover Dam’s concrete. He’s more concerned with running “the Black Bank,” an underground lottery complete with runners, middle men—the works. The only thing standing in his way is Simeon Eliason, the boomtown’s dictatorial mayor. But does Black fall in line? No, instead he doubles down, and the reason is simple. If Black succeeds, he may never again have to perform hard labor. But if he fails, Eliason will have the proof he needs to send Black to the very back of the bread line, or worse. He could cement Black’s legacy as a warning to every gangster intent on creating Sin City.

“Mud Puddlers” is a crime-fiction finalist in the 2018 National Indie Excellence Awards, so what are you waiting for? Start your adventure now. Scroll to the top of the page and buy your very own copy today.