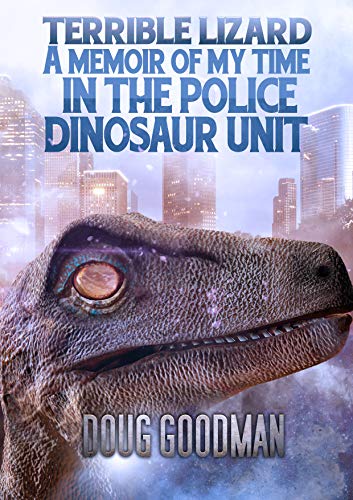 Banshee may be a great Police Working Velociraptor, but he’s one terrible lizard.

Or so Oak Jones thought. He’s wanted on the Police Dinosaur Unit all his life. Now that he’s in, he’s discovered that training a raptor is a lot harder than he ever imagined. And if he thought training would be difficult, living with one is a whole new level of weird. Banshee can clear a six-foot fence like it was nothing, and he has a love for eating the neighborhood cats, which is putting Oak on the outs with his next-door neighbor, Christy Dao.

But there is a reason for everything, and when Oak discovers why Banshee struggles, it breaks his heart.

Terrible Lizard is a funny and endearing look at life with Banshee, a great working dinosaur, but one terrible lizard.

Officer Hendricks sat at the temporary desk for training leads. He was without his sunglasses for the first time ever. His bright blue eyes burned with intensity.
“I wanted to talk to you about Banshee,” he said.
“I know it was rough yesterday,” I said, “but we’ve made good progress.”
“You have, and it’s to be commended. You are the best handler here. But it’s a team effort, Oak. I called you in because I wanted you to be the first to hear that I intend to fail Banshee.”
“What? No. There’s still two weeks left.”
“Less than two weeks left. And this isn’t the kind of thing that gets fixed in less than two weeks.”
“Give me a chance.”
“Oak, you will be returned to your station until I can place you in Violent Offenders. Renato has given you a great review, and the captain there can’t wait to have you. Next year, you can re-apply. I cannot guarantee you that you will be accepted, but based on what I’ve seen over the past four weeks, I like your chances. You will definitely have my vote.”
Officer Hendricks extended his hand to me, and I shook my head. “No. I refuse. Give me two weeks.”
The open hand pinched Officer Hendricks’ nostrils. “You are not the first officer to work with Banshee. This was his third time in the course. Three strikes, and the raptor is gone.”
“So that’s it? There’s nothing more that can be done?”
“Not in my experience, Oak. I’m sorry.”

A fun story about Eons-ago when the world was flat and dinosaurs roamed the world. The domestic animals had arrived on earth but the only dinosaur left was an aggressive carnivore who threatened their existence. His attempt to eat each of the domestic animals is met with failure as the domestic animals go to great length to escape his huge jaws. The domestic animals survive by taking extraordinary actions to escape. The only dinosaur left meets his demise when he is blinded by the sunset and ends up falling off the flat earth. It is unclear where the dinosaur ends up after falling after the world. Themes from familiar nursery rhymes and classic children’s stories are playfully woven into the story to inspire the child to think about other stories and whether or not it relates to the extinction of the dinosaurs. This fantastical journey can evoke a conversation with a child about whether the world was always round, or did the world change shape after the dinosaur disappeared. This book offers a great opportunity to have a playful conversation with a child about the shape of the world, how the world has changed over the centuries, or what is the real reason dinosaurs are extinct.