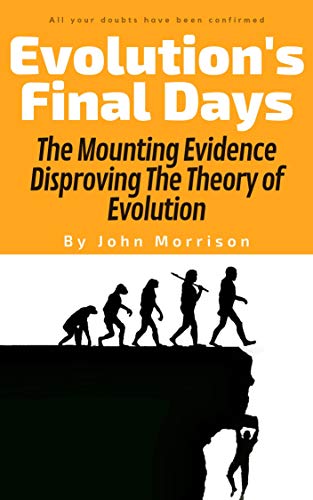 The Theory of Evolution Is In a Crisis

**Note: If you are using the Amazon app on an iPhone and there’s not an option to purchase the Kindle edition of this book, copy and paste the following link into your mobile browser: https://amzn.to/2LPI3W2

In this groundbreaking book, John Morrison examines the theory of evolution currently being taught in high schools and colleges across the world. This planet was once nothing but liquid and gas but somehow, over billions of years, the countless number of living organisms currently on earth came into existence. This includes humans descending from apes.

Once the currently taught theory is understood, John then proceeds to explain what the textbooks don’t teach which puts the theory of evolution in a new light. Once you’re done reading Evolution’s Final Days, you’ll realize that the theory of evolution could never have happened in the way scientists proclaim, and the many reasons why new theories are not currently being taught. You’ll understand why we need to stand up as a community, and fight for science to be taught as it was intended. And you’ll come to know why the theory of evolution is truly in its final days!

Whether you’re new to the theory of evolution or have your PhD, this book will truly make you question what you have been told, and you’ll be sure to learn new information you may have never knew existed.

As a FREE bonus, only for book buyers, you’ll receive John’s special reports titled The Top 5 World Mysteries and The Top 5 Most Haunted Places in America. These special reports are not available to the public, or anywhere else. They exists solely as a “thank you” to buyers of this book.

Expand your mind and learn what evolutionists don’t want you to know. Click the “Buy Now” button at the top of the page and start reading Evolution’s Final Days TODAY!