Skip to content
Free ebook Jan 1 – 3 2023, All reviews are greatly appreciated! Kia Santor is desperately trying to do what her mother wanted, to stay hidden and safe. That means that she has to hide her extraordinary abilities to heal and connect to others telepathically. But when she breaks her vow to keep her abilities a secret to save a man’s life, she finds herself thrust into the shadowy world that surrounds the new military organization called Black Branch. She must now help herself and her new team uncover what hunts her and seeks revenge against them. Kale Reyes wasn’t prepared for a woman to be brought onto his elite special operations team. After losing his sister and a team member in the incident years ago he had harden his heart and operated like a true operator; unthinking and unfeeling. Until Kia came to the team and turned what they thought they knew about the world upside down. Now he has to not only protect the single person in the world that could make him feel again, but he has to do so while facing an old enemy that has him and Kia in its sites.

Your reviews are important and valuable! Born and raised in a small Virginia town Bonnie’s aspirations were to serve her country. At seventeen she joined the US Army as a Military Police officer. After suffering from a hip injury she had to end her service earlier than planned but found new goals. Bonnie then collected the short stories that she wrote throughout her military career and created her first novel: Virgil Team. Now she is pursuing what she enjoys as a writer and photographer
Website : http://facebook.com/bonblev

Discover the dire side effects of partying like a rock star.

As lead singer of popular, emerging rock band, Tracing Stars, Kennedy has the swagger of a badass, or at least she used to. While caught up in the booze, passion, and chaos of her first major rock tour, her dreams are erased by a string of ever-worsening blackouts. Now, the instability of her mind has landed her in a psychiatric hospital. Despite being convinced one of her tour mates sabotaged her, she lacks any evidence. Trapped in the asylum, she alternates between the past and the present determined to recover her lost memories so she can return to her band before she’s just a footnote in their rise to fame. 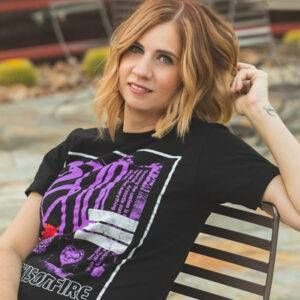 Lauryn Dyan is a marketing professional by day, an author and graphic designer by evening, and a fanatical concert enthusiast by night. She has written album reviews, conducted interviews, and penned columns focused on the rock scene for an independent music magazine as well as her own blog as a way to legitimize her desire to share her music opinions with others. When not busy with one of her many gigs, she is working on or at least thinking about her next great story that will keep you guessing.

The old world has died.

In the frozen wastes of a new ice age, a boy must become a man. Having forgotten who he is, this youth must accept his destiny to lead, fight, and die if necessary for what he believes . . . or a magic from a lost era will destroy them all.
As a tyrannical empire rises, he and his childhood companions must band together as warriors to battle against savage creatures, an army of zealots, and an evil they are only just beginning to understand . . .

A thousand years ago, on the Day of Cataclysm, the world changed. Mountains rose from plains, continents fell into oceans, colossal tempests obliterated civilizations, and jotun, creatures of legend and superstition, rose up. The New Ice Age began, blanketing the world in snow and an army of draugr, dead warriors, walked the earth destroying every remnant of the old age.

From the ashes, the Church and the Clan BjornsGaard united humanity behind their banners, rallying knights and heroes to face this new world. Under their leadership, mankind overthrew the draugr and retook control of its destiny.

In the centuries since, the Church grew into an empire, controlling most of the continent. Though its origins were noble, the Church State grew based on greed, racism, and slavery. Only two militant orders of knights, the Hospitalars and the Tau, allied with the islands of the BjornsGaard Commonwealth stood against the Church States expanding pogroms. But during the intervening years, the Kings of BjornsGaard had grown corrupt and weak. In one night, the entire family was assassinated, opening the way for the Church to expand spreading its suppression and holocaust.

But in BjornsGaard’s farthest northern island, hope is dawning. In the Hospitalar’s Northern Compound five orphans, physically and intellectually gifted and trained by the Hospitalar knights to fight, to heal, and to reason, grow up together. With a bond tighter than normal siblings and forged stronger by pain and loss, these five will grow to challenge the Church State and accept their destiny as leaders in this new age.

*Disclaimer*
Heirs of BjornsGaard is a clean fantasy adventure series, meaning that there is no sexual content, nudity, or language. However, it does contain some violence and mature subject matter that may not be suitable for younger readers. Discretion is advised.

About the Author
R.J. Redmond told his third-grade teacher that when he grew up, he wanted to live in a cabin on the water and write stories. Throughout his life, this dream has remained the same. Mr. Redmond holds a Bachelor’s degree in Political Science from Washington State University and a Juris Doctorate from the Gonzaga School of Law.
A. Elaine Dunlap-Redmond is Mr. Redmond’s business manager, agent, and partner in all things. They live together on the Puget Sound in Washington State.
For more information on this book and others, visit Votes4Sasquatch.com.