Skip to content
What happens when Teri gets the medallion from one of her co-workers and she brings it home to her boyfriend Sam? I think you can only imagine! Well, you don’t have to because it’s all right here!

Morpheus is an award-winning author whose works focus only gay and it transformation. His work has been praised in Library Journal and Publishers Weekly, and he contributes to many other sites.
Website : https://www.amazon.com/dp/B09RQTGDSL
Shortly after the fall of the Soviet Union, Lev arrives at the pioneer summer camp, where he’s instantly dragged into an illegal booze-smuggling operation. He finds himself part of the camp elite and meets Nik, the arrogant and ill-tempered gang leader. Against his will, Lev falls desperately in love with the boy who seems to hate him. “A Juvenile Country” is a tender, coming-of-age queer story about the unthinkable romance in chaotic post-soviet Ukraine. A tale of the first generation to grow up after the fall of the regime, learning to survive in the obscure reality of a newborn country. It’s a peek into the life of a pioneer camp, with its head-spinning freedom of the strictly-regulated days of the Shift.

Jane is a Ukraine-born writer living in Toronto. She’s a tech enthusiast and an LGBTQ-rights activist.
Website : https://janepalash.com/
Bryan Hoenig has it all. A wardrobe full of the most fashionable and one of a kind clothes, millions of adoring social media followers skyrocketing him to full-blown influencer status and a future stake in a major European construction company. But beneath Bryan’s perfectly curated surface lies a shattered life crippled by depression and self-esteem issues. One just fragile enough that an outlandish comment from a digital stranger sends him spiraling out of control and into the intoxicating embrace of the New York City nightlife – drunk and ready for any trouble that comes his way. As Bryan gives himself to the music and gets lost in the sweaty sea of the dance floor, he crosses paths with Vic, a tall and incredibly sexy stranger who finds himself on the receiving end of Bryan’s drunken confessions. But what started as a loose-lipped tell all at the bar turns into something darker as the lives of the two men become more and more entangled. When Vic’s obsessive nature comes dangerously close to the surface, he immerses himself into Bryan’s life, desperate to protect him from everything and anyone – by any means necessary. But how far is too far? How far will Vic go to keep the sins of his past from derailing his carefully-laid plans for the future? Because you know what they say about the secrets we keep…the only way to truly get rid of them is to hit the kill switch.

BJ Irons works in the field of education. Many of his personal experiences as a gay man, have contributed to his works. Being a part of the LGBTQIA+ community himself, BJ hopes to continue to bring more fun fictional works to his LGBTQIA+ readers. The world could always use a little more color and fun.
Website : https://bjironsbooks.com/

Tel, handsome crown prince of Feigh, has negotiated an end to the war between his country and the strange queendom of Omela. He looks forward to an easy reign of wild parties and wilder men. The deities have other ideas, however, in this gay fantasy novel of transformation, redemption, and love.

When his father dies suddenly, Tel is outmaneuvered by his brother, losing the throne. Tel’s faith prohibits him from raising his sword and spilling blood, so he accepts the humiliation, working to temper his brother’s baser impulses. But the new king’s reign takes a dark turn, and his collaborators begin to round up undesirables, including those with a magic called the stagsblood.

Tel must decide: Flee or fight? Running means abandoning his people to his brother’s evil whims. Standing his ground means the sin of total war. He has no army and only a few allies—and his magical secret.

Caip, his closest friend and protector, brings military experience and blunt advice. Her right hand, Dar, is the picture of loyalty. Tough, battle-scarred Bin doesn’t suffer fools gladly. And Vared, a mysterious singer-turned-diplomat from Omela, speaks the truth to Tel in ways no one else can. 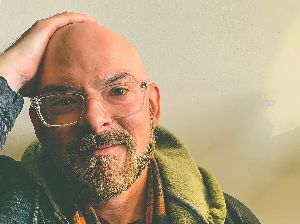 Gideon E. Wood writes gay fantasy fiction. He has been proudly clean and sober since 2011. Second chances and transformation are at the heart of his work. Gideon lives in New England with his cat but thinks it’s important you know he isn’t a cat person.

You can find him on social media @gideonewood or email him: [email protected]

Jesse Minkin is a study-mad Harvard hopeful. Anything that could possibly distract him from this goal is just petty teenage drama to him, including romance. His two best friends since childhood—the popular jock and the intimidating bad boy—have created the perfect shield for him, behind which he can safely practice his nerdy ways without harassment from bullies. However, when he meets the openly gay target of a violent hate crime, Jesse begins to see beyond his textbooks; perhaps there’s educational merit in petty teenage drama after all, and not all learning leads to Harvard.

(contains mature language and references to drug use)