“I know what she is!” I spit it out.The slap nearly knocks me off my feet. My cheek feels like a fresh burn. Dad has never hit me in my life.”Courtney’s life turned upside down when her mother was killed by a drunk driver. Now, they are moving from Minneapolis to her father’s hometown in New Mexico, where he will run an art gallery, and all the houses are brown. Older sister Francine is heartbroken because she has to leave her boyfriend behind. Younger sister Toby just misses Mom. One thing is particularly disturbing: her dad’s friend Silky. He says they know one another through the gallery, but is that really all? It seems she is always interjecting herself into their lives. Courtney, who is a good cook, took over cooking meals for the family, but lately Silky’s even intruding there. Silky is a terrible cook, but her father eats everything she prepares and compliments it. Being a teen is hard enough, but she doesn’t want a blended family. Courtney’s conflicted emotions cause her to say hurtful things to Silky, and then regret them. She tries to cope with feelings of loss and the need to move on.Courtney and Francine hatch a plan to sabotage Silky; but soon Francine has found a new boyfriend leaving Courtney alone in the effort. All the while, Silky is trying to make friends with the family. She invites Courtney to tweak her cooking skills with the promise of teaching her how to make pottery. Drawn to Silky’s tales of Native American artists and their search for the best clay, Courtney grudgingly listens even as her interest grows. Silky’s stories are full of intrigue and clandestine journeys to collect clay under cover of darkness. During one of her pottery lessons, Silky shares a painful story with Courtney. Loss does not play favorites. She meets Audrey, the girl next door, and immediately strikes up a friendship. Audrey is an outspoken know-it-all with a sense of adventure that is infectious. She takes Courtney on new experiences including the Albuquerque Balloon Fiesta. She and Audrey attend a mass launch which is unlike anything she has ever seen. Courtney is spellbound watching the hot air balloons. Unfortunately, Audrey has a dark side. She makes a mistake that challenges their newfound friendship and threatens Courtney’s delicate relationship with Silky. Despite her resentment about moving, thirteen-year-old Courtney discovers this strange new city with its brown houses, Pueblo architecture and ancient stories to be as mysterious as it is beautiful. Even as she resists, Santa Fe casts its spell. 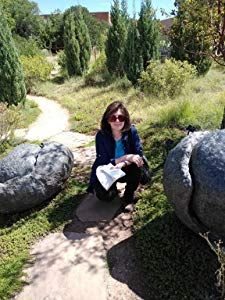 G G Collins loves the southwestern US where many of her stories are located. She can be found hiking through ruins of the ancient ones and enjoying New Mexican cuisine. When not traipsing about, she makes up stories with great friendships, quirky characters and, oh yeah, dead bodies. In real life she shares her time with a man, several neurotic—and psychic—cats and the ongoing struggle to grow a garden.