Skip to content
Join Aurthera in a gritty and futuristic quest to uncover the secrets of the Island trials and find a safe harbour. “Well, my lovelies, the choice is yours, though don’t you dare think of breaking up this merry little band. Or we’ll kill all of you.” In this epic instalment, Aurthera lays close to death. The lost children flee the evil metal men and end up adrift at sea with no food or water. After being pushed to the brink of death the children uncover a strange island which seems idyllic at first. Little do they know of the dark things the island has in store for them, white sands and bioluminescent plants. Vicious beasts, venomous insects and worst of all, the mysterious fish-people who lurk in the deep, just waiting to strike. Aurthera and her friends take to the high sea’s, with nothing but their wits and their will to survive. Many trials await, yet through it all the cunning nameless one watches and waits for her chance to strike. Will Aurthera and the lost children make it out alive, or will the final stretch of the island trials spell their doom? “Astonishing world building in the story and architecture with puzzles was amazing and fight scenes are substantially explained waiting for upcoming books in series.” —Shaik Moosa

By age 25 K.H. Giblett had traveled to 26 countries working as a translator for the UN. He’s worked in war zones in the Middle East, and helped broker deals in Africa, India, and Europe. One day he gave it all up and focused on unravelling the secrets of our past. Not much else is known about Mr Giblett. Some say he discovered something and now works tirelessly translating old stories.
Website : https://www.amazon.com/dp/B09MBRDTPF
“Look Kid! You’re going to see a lot of death on the island. You’d better get used to it now; otherwise, the jungle will devour you!” Aurthera barely survives when her pod crash lands on a strange planet. The inheritor of a great responsibility, and if she fails all life in the universe will be at risk. Except right now, she doesn’t know that, in fact she can’t remember anything except her name and a promise that she can never break. She discovers other children, and like her they can’t remember anything, except their names The clock is ticking down to find a way off the island but outside the safety of camp is a jungle filled with death traps, alien monsters and worst of all… the Xendacor. Will Aurthera and her friends be able to uncover the secrets of the island and make it out alive or will the behemoth called the Xendacor, get them first? Join Aurthera and the lost children in the first book of the series as they face the island trials and discover the organization who put them there; and fight to survive on a hostile alien planet.

By age 25 K.H. Giblett had traveled to 26 countries working as a translator for the UN. He’s worked in war zones in the Middle East, and helped broker deals in Africa, India, and Europe. One day he gave it all up and focused on unravelling the secrets of our past. Not much else is known about Mr Giblett. Some say he discovered something and now works tirelessly translating old stories.

“The vast cosmos isn’t what it used to be in this clever SF tale.”  -Kirkus Reviews

The universe has died.

It has reached its eventual heat death and no further life processes are possible.

When a nihilistic, malevolent force releases a pathogen designed to end all life, a young girl and some allies must get to the central world to keep her world from being destroyed to stop the spread of the virus.

Book one of the New Sky trilogy is an epic adventure featuring multiple worlds and characters whose actions will determine nothing less than whether or not life continues. You’ll love the characters and adventure in this novel.

You can read the whole kirkus review at: kirkusreviews.com

A childhood sense of wonder led the author to discover the stories and deeds of the great mythological heroes. Eventually, however, Achilles, Hector, and Theseus, not to mention lesser known characters in Celtic, Germanic and Native American myths led to an enjoyment of such larger-than-life heroes as Superman, Captain America and Thor. The first actual science fiction novel read (at the age of 15) was Arthur C. Clarke’s Childhood’s End and with that the author was hooked. Through varied incarnations as a businessman, accountant, construction worker, and various sales positions the urge to write was strong, but not pursued until reaching his fifties. 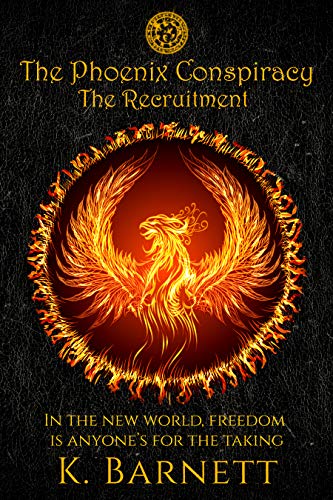 Fans who love The Hunger Games and Divergent will be captivated by YA dystopian adventure, The Phoenix Conspiracy.

In this new release by K. Barnett, friendships and alliances are tested when the powers that be recruit teenagers against their will, to either become an army, or a peace corps in search of new land.

The Phoenix Conspiracy puts a new spin on a popular genre with fascinating characters and mysterious motivations.

This absorbing tale depicts a potentially real set of circumstances in which humans have destroyed Earth through global warming.

Set 380 years in the future and with a genetic twist, readers will discover who and what parts of society survive the apocalypse.

The future of mankind depends upon genetically modified humans who can fly, and a girl who will stop at nothing to be truly free. In a world consumed by water, there are those that believe beautiful and vast lands still exist somewhere beyond the storm ravaged oceans around their little island known as Continent One.
Alya and her friends abide by strict rules managed by a strong enforcement agency of Patrol officers that monitor and restrict their desire to fly, that is until they discover secret plans to conscript an army of their peers who will be forced to travel across the raging weather systems of Earth, in search of the new continent.
Along with shocking recruitment revelations comes Alya’s recognition of her evolving abilities to outfly her peers. So begin some dubious theories that she may have been illegally modified as part of the conspiracy to find new land by any means necessary—even if that risks Alya and her friends’ lives.

The Conspiracy Theory delivers on all fronts for adventure and mystery and will align with readers that enjoy characters in the midst of discovering their own fortitude and resilience.