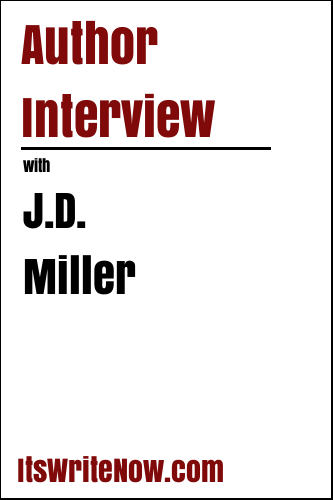 Today I’m catching up with J.D.Miller about his new book dystopian sci-fi novel ‘The Steel Harvest’.

J.D., can you please set us up with a summary of ‘The Steel Harvest’?

The Steel Harvest revolves around Carter, a young man who works as a trader and scavenger on the east coast of “The Northern Lands,” a terraformed version of the United States. On a scavenging run, Carter discovers a young girl in the wreckage. This girl, Silvia, is from “The Shell,” a huge planetary exoskeleton built long ago that covers a majority of the planet. The two’s meeting jump-starts a journey of epic proportions.

How did the idea for your book begin? What were you trying to achieve?

The Steel Harvest was really born out of the need to try something new. Despite being set in the future, humanity has declined to a state most akin to the crusades. The result is a new and interesting hybrid, a mix of both historical and future setting pieces that opens doors for incredible and unique narratives. The Steel Harvest was also born out of the relationship shared between the two main characters, Carter and Silvia. Their dynamic is one that is in complete contrast to each other. Before The Northern Lands or The Shell were even thoughts in my head, the idea of two completely different strangers being thrown into an incredibly personal journey really stuck out in my mind.

The connection that the readers develop with the characters in the ‘Steel Harvest’ is one of the really strong aspects of the book. How did the characters come to you?

Carter and Silvia came to me in a flash of inspiration, though not as they appear in The Steel Harvest. They have gone through several revisions, the most notable being a space frigate captain and a stowaway. Once I came up with the setting, that really locked down their characters into what they are today. The supporting cast came later, bi-products of the setting and the plot.

Were Carter and Silvia your favourite characters to write?
Silvia and Ramus are probably my favorite characters to write. Silvia has this unrefined curiosity to her that can lead to some of the most awkward situations for her and her traveling companion. Ramus began as an outlet for pouring my own personality into, though he quickly evolved into something much more than that. The final results left him as a fairly important character to the plot, and if the opportunity were to present itself, I would love to use his character again.

‘The Steel Harvest’ is a really strong book. I’m curious to know, how long did it take for you to write this book?:

The idea for The Steel Harvest first presented itself in October of 2015. Over the course of a month, I began fleshing everything out, and in November I wrote the rough draft as part of National Novel Writing Month (NaNoWriMo). Initially overwhelmed from pushing 50,000 words out in less than a month, I let The Steel Harvest take the back burner creatively until January, where a friend in the editing field helped me begin refining and reworking my manuscript. Between February and April, I wrote two more rough drafts. Then, towards the end of April, I submitted my manuscript for professional editing. Finally, on May 26th of 2016, I published the finished version of The Steel Harvest.

Wow, that is an impressive timeline. And congratulations for successfully completing the NaNoWriMo. That in itself is quite a feat. Now, that you have completed this marathon task you can take some time to enjoy your work. What did you find the most rewarding thing about writing this book?

The most rewarding aspect of writing a book has easily been reader feedback. At the end of the day, authors are really just storytellers. It’s easy for us to fall in love with our own ideas, but when a reader responds in kind, it just brightens my day.

Are you able to let us in on what are you working on next? Are we likely to see any more from the ‘Steel Harvest’ world in the coming months?
In light of getting The Steel Harvest out the door, I am taking a small reprieve to recharge both my writing abilities and my creative juices. However, I plan to continue what I started in The Steel Harvest. I’d expect some news regarding that sometime towards the end of this year.

The end of the year. We will keep our eyes out that upcoming news. In your time off you must be doing some reading. What are reading at the moment?
I am currently reading a self published science fiction novel called “Tears of Glass” by Jessica Cole.

Do you have any other authors who you can recommend?
Some of my favorite authors include Isuna Hasekura, Chris D’lacey, and Rick Riordan.

Is there a book that you wish that you would have written?

Given the chance to alter history, I would rewrite the Twilight series as horror series following Bella’s dad as he tried to stop the mysterious murder sprees in his town. No sparkly romance… You know, the way vampires were supposed to be?

That’s a great idea. I’m sure there’d be lots of takers for that rewrite.  And finally, what is your favourite quote?:
My all-time favorite quote is by my hero, Robin Williams, who said, “You’re only given a little spark of madness. You mustn’t lose it.”

Keep that spark of madness, and I’m sure both myself and your readers will eagerly look forward to the next installment in the Steel Harvest series. Thank you for your time today.

Want to find out more about J.D. Miller and his novel, Steel Harvest?  Contact him at the following locations: