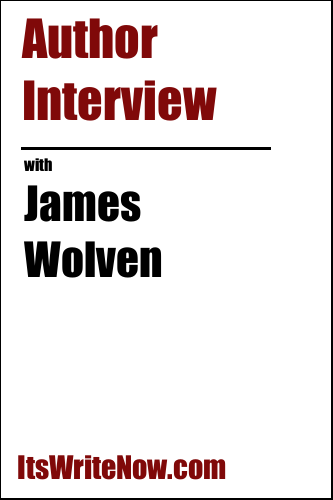 A hunter named Rafal communes with a shapeshifting, wish-granting demon known as The Whisper of the Coals. The demon is able to grant nearly anything, from power to knowledge to riches, yet Rafal’s increasingly mundane requests arouse a sense of mystery at what it is he’s truly after, and whether or not he can outsmart the long-lived demon to achieve it.

Will Rafal be able to outsmart the demon? Will the demon outsmart Rafal? To guide us safely around the demons, James Wolven, author of The Whisper of the Coals has stopped into ItsWriteNow.com to chat for a few minutes. James, when going into demon territory the first thing to do is to get the background information so you’re not blindsided. Can you take us through the background events that lead up to your initial ideas for The Whisper of the Coals.

Mainly, it arose from my fascination with the concept of granting wishes, something often explored in old fairy tales but thought to be impractical storytelling in our science-driven era. I knew I wanted to write my own version of the “genie in the lamp” tale, but I wanted to do something new with it, so I made the ordinary human the center of the mystery and wonderment instead of the “genie.”

The eponymous Whisper came about as a desire to put a new spin on the fairy tale concept of summoning mythical creatures or demons. Usually in fantasy you throw a sword into a lake at midnight or go to the hollow of an ancient tree; I toyed with concepts like ponds, wells, trees and pits to summon the Whisper, but I decided fire itself wasn’t often used in such a way, so I created a fairy-tale-esque mythos of having to summon the Whisper from a bed of coals.

Rafal was, in some ways, a bit cobbled together from various perspectives. With the direction I wanted to take the story, I decided to make the protagonist slightly older and more world-weary to give him the wisdom and experience to go head-to-head with a demon. Much of his background and personality emerged on its own as I wrote, leading to an ex-soldier now trying to make a peaceful, honest living as a hunter.

Did you find it useful to include experiences from your own life to build the character’s backgrounds and personalities?

Well, I’ve certainly never bargained with a demon! However, aesthetically, I did pull a bit from my childhood growing up in Georgia. I grew up in a very mountainous, forested region and used the sights, sounds and smells of that region to influence the Mountain of Reflection featured in the story. Aside from that, the short story is very much an homage to Andrzej Sapkowski, author of the Witcher series of fantasy novels (and one of my favorite books ever, The Last Wish), and I deliberately pulled from his writing style and gave the two named characters Polish names to reference this.

As you wrote, did you find your mind continuously returning to Andrzej’s novels to ensure that your writing style was matching his? If not, what did your mind focus on as you wrote?

I guess I’d say two things keep me going: the end of the story (because I can’t wait to see how readers react to all the little twists!), and the thought that a reader might find something meaningful and important that makes them happier souls or better informed about their worldviews. I never try to be “preachy” in my stories, hence why most of my stories don’t have any set “morals,” but I usually try to get people to think about life and morality in new ways rather than however they may have been told all their lives.

Writing something that makes people think about new ways to live their lives is quite a challenge, and no doubt you learnt a lot along the way from taking it on. What were the important things that you learnt?

For one, short stories can be surprisingly fun to write, even more than I gave them credit for. I used to think I only had ideas for long epics, but sometimes you get to tell more important messages in more clever ways when you focus on one detailed scene. Also, sometimes writing things out in a story helps the writer understand themselves and the world better, even though you’d think we’d already know since we’re the ones writing. In particular, the end got me thinking more about the nature of accepting our losses and letting things go.

Was this ending and your ideas of how to deal with loss and letting things go the most important thing that you hope readers take from the journey this story takes?

The Whisper of the Coals is one of those stories that doesn’t have one particular “moral” per se; however, if I were to boil it down to one point, I would say we can never be happy if we’re looking to have wishes granted instead of accepting life is going to be give-and-take all the way through.

Do you find that give-and-take nature also applies to your writing? Is it exhausting, energising, or something else entirely?

Let’s say it leaves me exhausted but aglow. I need to write in order to stay sane and I love the process, but sitting down for extended periods and prompting words out of my head can sometimes leave me feeling mentally tired as well.

Those words can indeed be tricky at times, but hopefully, with a bit more practice you’ll both keep yourself sane and get those words tumbling out faster. So, what projects are you working on at the moment to help get those writing skills moving forward?

There are a number I’m plunking away at, some which I’ve decided to bench in order to focus on others as life mandates. Currently, I’m writing to the first novel in a sci-fi action/suspense series called Guilt Eater, focusing on how tragically gray and muddied concepts like survival and killing can become under the right circumstances. On the other end of the “lighthearted vs. mature” spectrum, I’m finalizing the first book in the Modern Magical Romance series of novellas, which is, as you might have guessed from the title, a lighthearted comedy/romance series set in a thoroughly-contemporary fantasy setting with elves, orcs and dwarves.

Wow, they really are on opposite ends of the spectrum! To be able to work on both ends at once shows you have some serious writing skills. Looking back, how do you feel that your writing has progressed over time?

I used to be a huge nerd, and it showed in my writing, since my plot twists and dialogue were more akin to cheesy anime than real, believable storytelling. Now I’m still a nerd, but I’d like to think my narrative tone has softened to that of an eloquent but dry-witted bard and my dialogue has become more human. In particular, I try to remain neutral and aloof as the narrator while still making dark-humored jabs at some of the shenanigans the characters get up to.

With your move towards a more believable storytelling style, have you also taken steps to create a brand around yourself as an author?

I’m still in the relatively early stages of my writing career, so I suppose I’m still figuring out precisely what my “brand” is. However, I know I’m going to write mostly fantasy and some sci-fi, and I specifically want to tell stories in ways that play with the conventions of writing and challenge readers to think about ethics and morality, not just as our culture says they should be, but how WE think they should be. In that vein, The Whisper of the Coals is kind of the summation of all those things in one short story: high fantasy mixed with moral questions while playing with established tropes. In some ways, I feel like The Whisper of the Coals is my defining story more than anything I have written or plan to write.

It sounds like you’re thinking up some big challenges for your readers, but to make sure you’re fighting fit to challenge them, I think a few challenges should be sent your way through our quick-fire question round. Brace yourself to take on new ways of thinking starting with the first question, if money doesn’t grow on trees then why do banks have branches?

It’s all in the eye of the beholder, really. Convince someone a stick in the key to immortality, and you can retire early.

Sounds good to me! If space is a vacuum, who changes the bags?

Space pirates. They think I don’t notice, but I do.

That’s very un-piratey of them, but perhaps they’re getting some booty in those bags that make it worth their while. Why is a square meal served on round plates?

Purely artistic merit. The first chef tried triangular meals, but everybody accused him of being Illuminati. To say nothing of the poor fool who tried pentagrams.

Those pentagrams are far too pointy to be considered food.   What was that poor fool thinking? Probably not about the awesomeness of words. What is your favourite word?

I’m sure it’ll change by tomorrow, but I like wolves, so let’s say “lupine.” Doesn’t it just roll off the tongue?

I think it does. To me, it’s one of the words that should be an L-filled tongue twister to really show it the proper love it deserves. On to the next riddle, can you cry underwater?

Yes, and every fast food joint will appreciate the salt you add to the world.

A little salt is a good thing. What is your zodiac sign?

Scorpio, but I swear I’m friendly to all other signs.

It’s important to be friendly! And one of the best ways to make new friends is to invent them. If you invented a new monster what would it look like and what would you call it?

I have invented many monsters, but the first one to come to mind is the tanglebeast of the currently unreleased Fallen is Oceanheart. Think of a gigantic bag of flesh and innards attached to a shrimp the size of a car with dozens of spindly spider legs that quickly regrow if you sever them. Its legs are generally too weak to attack or pull, but using all of them at once it can slowly maneuver prey into its mouth.

Yeah, I’m not sure if I want to be best friends with that guy, it sounds like it could end painfully! On painful topics, What happens if Batman gets bitten by a vampire?

Contractually he has to call himself Manbat and dress like a human, which he isn’t too thrilled about.

But does he get to keep the car? And finally to finish our thinking festivities, if you could breed two animals together what new animal would you create?

Wolfosaurus Rex. Because sometimes scientific curiosity and the desire to do something “awesome” presides over common sense and public safety.

Now he sounds cuddly and cool! I’d definitely want to meet him in one of your future books, maybe it could even be your most defining work! James, I’ll leave you now to ponder that question, and thank you for successfully guiding us through the demons lurking in the pages of The Whisper of the Coals.

Excited to read the book we discussed today? Find it here on Amazon: ‘The Whisper of the Coals ( ASIN: B078XNBJHD )‘.

Want to find out more about James Wolven? Connect here!