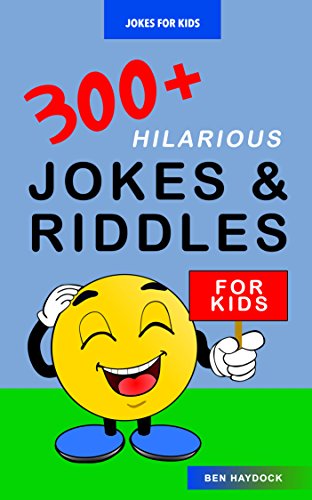 Jokes for Kids: 300+ Hilarious Jokes and Riddles for Kids

Every kid cherishes their first joke book. Whether it’s Knock Knock jokes, Doctor Doctor jokes or Animal Jokes, they’re sure to find a whole bunch of hilarious jokes and riddles that will have them chuckling for hours.

Jokes for Kids: 300+ Hilarious Jokes and Riddles for Kids is the latest joke book from leading non-fiction author, Ben Haydock, and follows on from the success of Even Bigger Book of Amazing Animal Jokes for Kids. Packed full of over 300 giggle-worthy jokes and riddles, your kids will be laughing for hours. You might even have a little laugh, too!

Jokes and Riddles for Kids

Featuring hilarious jokes such as…:
How do you stop a skunk from smelling?
– Hold his nose shut
Why did the boy throw his watch out of the window?
– He wanted to make time fly
What do you call a boomerang that doesn’t work?
– A stick

You’ll find these jokes and many more in this hilarious children’s book, which kids and adults will love!

Perfect for teaching children how to read while letting them discover their favorite jokes and riddles, it will keep them entertained for hours – making it ideal for long car journeys and bedtime reading.

Click Buy Now to download this best-selling joke and riddle book and help your child become a comedy expert in no time!