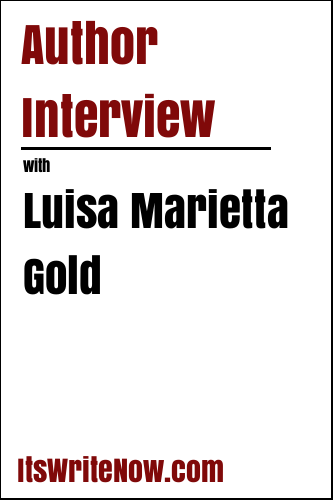 The mystery begins with an unusual find in the secret compartment of Doug’s new Corvette. It will forever change his and Catherine’s life. Doug’s mysterious behavior after the find forces Catherine to seek escape at The Osprey Cove Lodge. What she finds at the lodge turns out to be far more valuable than Doug’s find. Follow the suspense, mystery, and romance of Book 1 of The Osprey Cove Lodge Series.

What value does Catherine find at Osprey Cove Lodge? Today I welcome Luisa Marietta Gold to explore the suspense and mystery encountered by Catherine and Doug in the pages of ‘Escape to Osprey Cove’. Luisa, thanks for taking time from your busy schedule to share your love of writing with us today. The Osprey Cove Lodge sounds like a lovely place to sit back and reflect upon the world. What inspired this location?

The setting is the Rideau Lakes in Ontario, Canada. This is an area where I spent many enjoyable hours. The Osprey Cove Lodge is an embellishment of some of the lodges that I stayed at before eventually owning a cottage on one of the lakes.

You’re so lucky! That little corner of Ontario is such a beautiful place in the world and a have a little cottage to retreat to must be amazing! What imporantace do you feel a location like the lodge or your cottage brings to a story?

We all need a place like The Osprey Cove Lodge to escape to. Life is full of difficulties but often positive things result from the trials.

Were some of the challenges or joys within this story inspired, or directly taken from your own life, or other lives you’ve observed?

Anyone who reads Escape and the additional books in the series will relate to many of the characters. We all interface with them in our daily lives. I was particularly interested in character development while writing the series. You will come to know the characters intimately and will begin to anticipate their next move. But they will at times surprise you too!

*Laughs* People and characters always like to keep you on your toes! As your characters like to surprise you did you find that the plot formed around their personalities?

Definitely the plot is formed by the personalities of the characters. My characters tell me what they will do next. They surprise even me at times! When I sit down at the laptop, I have no idea where they are taking me!

*Laughs* It sounds like you have to strap yourself down for the ride when you’re in front of your laptop. Did that exhilarating journey taken with your characters give you the greatest rewards while you were writing?

I read to enter another world. I feel The Osprey Cove Lodge Series allows the reader to escape into another interesting, romantic world full of mystery at every turn.

So your writing was more to share a new world with your readers. Are there any new escapes expected in the Osprey Cove Lodge world?

There are already five books in The Osprey Cove Lodge Series. Escape is Book 1. Currently I am working on Book 6, Discoveries. I have fallen in love with the characters and the world of The Osprey Cove Lodge, as have many of readers. I plan to continue the series into the future.

What’s has helped you fall in live with the characters to continue revisiting them?

I write because I love it.

How much of your time are you able to allocate to your writing passion?

I write every day — at least one chapter, often two.

Wow, that’s a fantastic rate! Is planning essential to help you keep this pace up? Or do you find out where the story will go as you’re typing?

The direction unfolds as the words hit the page.

Is music an important part of the process for you to get those words to hit the page?

Before you return to your silence within the world of Osprey Cove, I’d like to dig into your personality to show our readers a little more of the author behind the novels with our quick fire question round. We’ll start the festivities with: who decides what morality is?

The creator; we came with instructions by the person who made us.

That’s an interesting point, I’m not sure I’ve considered the idea of instructions before. What is your favourite Jellybean flavour/ colour?

I have to agree those black ones are fantastic. What is your favourite ocean?

Another rightie! And finally, to show our audience what’s really in your heart, what is your favourite flavor of ice-cream?

*Laughs* Luisa, thanks for chatting with me today about ‘Escape to Osprey Cove: Book 1 of The Osprey Cove Lodge Series’ and I hope you get to enjoy some decadent chocolate ice-cream while you’re sitting in your cottage following the latest adventures of the personalities who live in Osprey Cove.

Excited to read the book we discussed today? Find it here on Amazon: ‘Escape to Osprey Cove ( ASIN: B01LYSDFXY )‘.