I have a secret.

I kind of faked my perfect SAT score to get a full scholarship at Middleson University. It worked, but now I have one major problem—Rick, a wealthy jerk who looks like Zac Efron and who’s blackmailing me with my lie. What does the jerk want in exchange for his silence?

I’m in a good mood till I spot something in the corner. Or more precisely, someone. Rick is here, and he’s staring at me. He looks like such a privileged d**khead with his pink polo shirt, chino pants, the sunglasses on his head, and the smirk on his handsome—but begging to be punched—face. I glare at him.

Oh, he’s this guy who’s blackmailing me because he knows I cheated to get a full ride to Middleson University. “He’s some jerk I’m hooking up with,” I mutter.

“Why are you hooking up with a jerk?”

“It’s complicated.” When Rick begins walking toward us, I say, “Jesus Christ. Excuse me.” I march up to him and hiss, “What are you doing here?”

He shrugs. “What are you doing here? I thought you were supposed to be studying.”

I flush. “I needed a study break.”

He wraps a possessive arm around my waist, whispering into my ear, “Why don’t we have a ‘study break’ at my place?”

A deep sigh leaves me. Because his suggestion is not really a suggestion.

All bets are off in the eye of the storm.

Trisha Harper has a dilemma. She’s crazy about two smoking hot guys, best friends who share a fascinating synergy. She’s honestly not sure which man she wants more, the dark-haired stunner or the gregarious blond jock. Maybe both?

Tommy and Ken know each other so well they’re able to complement each other’s strengths while minimizing each other’s weaknesses. Neither man can imagine a life without the other, but they never expected to fall for the same woman. Meeting Trisha changed everything.

A hands-off, gentleman’s agreement kept the peace but as the trio hunkers down together to ride out a potentially deadly hurricane, the quarters are close and the sexual tension is stifling. A game of strip poker has both men teetering between desire and the fear of rejection and loss.

Lightning crashes. Jealousy flares. Tempers explode, and then the power goes out. What will happen in the dark, and how will they face the dawn?

Rock You Like a Hurricane is a stand-alone, Male-Female-Male (MFM) romance but also a prequel to the unfolding bisexual menage saga of the Triple Passion Play series. The story contains sizzling, put-you-in-the-moment love scenes with graphic, descriptive language. If you are offended by explicit content and heavily implied bi-curiosity, you might want to read a different book. Previously published by Liquid Silver Books. 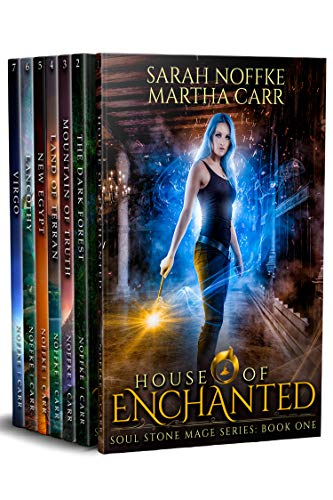 “Magic could be the very death of you…or it could be what saves the world.”

In the Kingdom of Virgo, witches and wizards have lived peacefully for thousands of years. On the other side of the Dark Forest resides the Land of Terran. The humans of Terran treat those from Virgo as second-class citizens, disgracing and trapping them at every turn. After centuries of tension, a silent war is finally brewing, and the timing couldn’t be worse for Princess Azure. This young witch will soon be crowned queen of the Kingdom of Virgo.

In the Dark Forest, a powerful potion-maker has been murdered. He was the key to ending the war.

Charmsgood was the only wizard who could stop a deadly virus that suddenly plagues Virgo. He also could have fixed the devastation the people from Terran had done to the forest. Now he is gone.

House of Enchanted: Just as the war with the humans is brewing, Azure is set to be crowned the new queen of Virgo. But on coronation day everything changes. Princess Azure isn’t who she thought she was and that’s a big freaking problem.

Dark Forest: Azure suddenly finds herself a prisoner of Terran. She must escape and locate her mother’s soul stone. The virus that stole the queen’s magic is going after her very life, and the soul stone is her only hope.

Mountain of Truth: Azure and her ragtag crew set off for the Mountain of Truth in hopes of locating Mage Lenore, the oldest witch alive. They soon learn the problem isn’t finding the old witch. It’s surviving each other on the mountain.

Land of Terran: A betrayal sends Azure on yet another adventure. She must get back the Book of Branches in order to find the rogue dryads. They are the key to healing the Dark Forest.

New Egypt: Queen Azure sets off on a world tour of Oriceran, thinking she’ll strengthen relations with neighboring kingdoms. On her first stop in New Egypt she finds something chilling.

Lancothy: New Egypt is being overrun by vampires. Knowing her options are limited, Azure sets off for the kingdom of Lancothy, where bats are known to reside. She must get to them before the vampires do. Bats are deadly to magic.

Virgo: With Lancothy in ruins, Azure and the gang help the wereanimals find new homes. Meanwhile, the vampires are planning a merciless attack on Virgo. Azure’s homecoming is marked by blood, tragedy and a great loss.

*NOTE: There’s cursing in this series because these witches and wizards are just rude like that. If cursing is a problem, then this might not be for you.

“This is such a fun fantasy adventure tale!”

“This book took me back to a time sitting on my mother’s lap while she read me fairy tales.”

“It held me captive from the first page to the very last.”

“Full of whimsy as well as a touch of humor.”

Sometimes a little magic can go a long way…

Young heroes and heroines step up to the plate, track down clues and take on challenges, magical or mundane, in this action-packed urban fantasy anthology.

All proceeds from this anthology go to the Authors League Fund, which provides grants to authors in financial need.

Circuits and spells, potions and power cells, their combination could prove deadly.

Unless Leira Berens gets there first. The Fixer has arrived to help her gain control of her powers. Will it be in time?

Someone has come up with a gruesome magical recipe.

Take one powerful artifact, mix with magic and a few engine parts. Remove vital organs and replace. Who is behind the deadly experiments?

The Gardener of the Dark Forest has joined the hunt, but what secrets is he keeping? What really happened to Correk’s father?

Leira and Correk have been to hell and back together. No time for a vacay. Their greatest adventures are still ahead.

Join the adventure with Leira and Correk and the troll today by scrolling up and clicking BUY NOW or READ FOR FREE in Kindle Unlimited!

An artifact race, a family reunion from the dead, a troll, and a deadly Light Elf. A typical Tuesday.

Leira Berens has joined federal black ops mixed with her own brand of magic. She’s coming face to face with what happens when magic collides with technology and organic matter.

Not pretty but very powerful.

The hunt is on to stop this new kind of shape shifting but can she do it without being wiped off the planet?

Secrets are swirling all around Leira. Some of them will heal rifts and others could tear them all apart again. Chasing monsters has become a lot more complicated.

Join the adventure with Leira and Correk and YTT today by scrolling up and clicking BUY NOW or READ FOR FREE in Kindle Unlimited!

Dragonriders are all that stand between Middang3ard and total annihilation.

But their numbers are dwindling.

Grab the entire series in one GIANT boxed set today!

With every passing day, more and more Dragonriders are falling under the scourge of the Dark One.

The forces of humanity and their allies are desperate. They need a new hero to step up and turn the tide.

Myrddin, the resistance’s leader, thinks he might have found that someone…on Earth, of all places.

Word has just come from the east that the Dark One is launching his largest assault yet, but there is still time to stop him. If, that is, they can find someone good enough to take him on.

Alex Bound just might be the rider they need.

But a human has never been accepted as a Dragonrider.

Alex isn’t someone to step away from a fight.

Not now, not ever, and she has no plans to start—even if she needs to ride a real dragon to make it happen.

Included in the completed 13 book Dragon Approved series is:

Go up and click Read Now or Download for Free and find out what happens when you cross a desperate wizard, and a willing fighter accepting the call to be the best when she is needed the most.

Solve a murder, save her mother, and stop the apocalypse?

She has a foul-mouthed troll on her side.

And she’s damn good at it.

Which is why when the Light Elf prince is murdered, the king breaks a centuries old treaty and crosses between worlds to seek her help.

Wait a minute. An Elf? Like from Lord of the Rings or something?

Yeah, Leira has a hard time accepting that.

But it doesn’t matter what she believes.

Magic is real, and it’s coming back with a bang.

The prince’s death was only the beginning. Tracking down his killer is about more than just justice.

If you’re looking for a heroine who prefers fighting to flirting, this book is for you.?

Click the Buy Now button and start the adventure today.

Magic is Returning to Our World… Early.

Detective Leira Berens case blew up in her face.

A last-minute surge of magic was the only thing that kept her in one piece.

The dangerous necklace is still in play and she has no leads.

Her new powers hint at a secret sauce in her DNA.

Can they help her win the race?

Oh yeah, the Feds have noticed and are tracking her.

A Light Elf is willing to help… along with a swearing troll and an entire magical community she never knew existed. Austin, Texas just got a lot more interesting.

The necklace reappears only to change hands during a dangerous battle. Who has the necklace now?

That may have to wait. Family comes first and Leira has a shot to free her mom. Can she take it and still do her part to save the world?

The adventure is just beginning… Click the Buy Now button and find out what happens next today.

Can she learn fast enough to fight off the Dark Forces on her own?

A mysterious Elf known as the Fixer arrives to teach her.

He may know more about her origins than he’s saying.

The World in Between has trapped Mara, but no one has ever unlocked its secrets. Will the magicals hidden in plain sight come together to help her fight?

The troll is loose in Austin for a night on his own. But when it counts, he fights by Leira’s side clawing at the danger…?

Who will emerge from the dark prison?

Don’t look away. Someone is practicing a Dark Magic that died out with an ancient foe.

Click buy now and continue the adventure in Protection of Magic.