Sports therapist Avery Troupe just got some bad news that’s left her jobless and homeless just weeks before Christmas. Taking a temporary assignment with an athlete who’s hiding away in the Caribbean for the holidays who has fired his last four aids might be just the answer to her problems. Sunshine, sandy beaches, and crystal blue water sounds like the perfect way to spend the holiday this year.

Drew Laskin is secretly on the mend in his island home following an injury doing something forbidden in his contract. The only thing worse than the pain is the guilt he’s feeling at having to cancel taking his nephew to see snow for the first time this Christmas.

Promising to keep Drew’s secret, Avery gets the bah-humbugging baseball star focused on an aggressive three-week plan to get him ready for training. By New Year’s they won’t ever have to set eyes on each other again. Only there’s an unexpected blizzard of Christmas magic about to change everything.

USA Today bestselling author Nancy Naigle whips up small-town love stories with a whole lot of heart. She began her popular contemporary romance series, Adams Grove while juggling a successful career in finance and life on a seventy-six-acre farm. Over twenty-five novels later, Nancy is a Romance Writers of America and ACFW Honor Roll author. Her books have been translated into multiple languages and received favorable reviews from major trade journals. Nancy’s latest release, THE SHELL COLLECTOR, is a touching novel of a friendship that crosses generations, and learning how even the smallest gifts can change a life for good.

Crown Media has adapted several of Nancy’s novels for Hallmark Channel, and Nancy novelized three Hallmark Original Movies set in the town of Evergreen. Hallmark fans may have recently enjoyed The Secret Ingredient and new in 2021 Sand Dollar Cove in the Summer Nights programming-both inspired by her novels.

Now happily retired from a career in the financial industry, this Virginia girl devotes her time to writing, antiquing, and horseback riding with friends.

How does a Secret Service agent protecting the president of the United States find himself becoming a part of a federal law enforcement team that’s so secretive that their deaths are faked? The team and its support personnel, known only as “the unit”, unknown to him, have had their eye on him.

How he ended up in the unit is not supposed to be known. However, when his wife—the unit’s only female member and the team’s sniper—insists on knowing, she manages to get him to tell his story.

This prequel to THE UNIT series is that story: the human side of how a young man became convinced that protecting the president should be his goal, and how protecting the president led to him doing much, much more. It takes you step-by-step through his journey, letting you see through his eyes and his thoughts how he traveled along the way. By the end of the book, you will know how he got his curious code name—Spud—and understand what is meant by the phrase “keeping it real.” 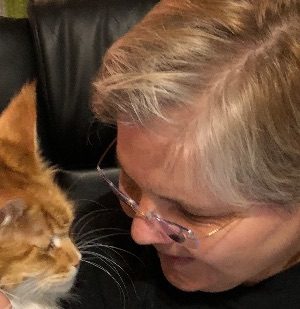 Anne Fox lives in El Paso along with 21 chickens, a pond full of goldfish, and two Maine Coon cats. She enjoys many hobbies, including crafts, gardening, and rockhounding. When not writing, she practices her marksmanship skills and draws upon that for her crime/suspense series, The Unit. Also the holder of a Commercial pilot’s license, she once ran her own flight school and trained many people to fly, having over 6,000 flight hours recorded in her pilot logbooks.

Anne began writing in 2019 with her debut book, Gabriel’s Call—a stand-alone novel about a woman believed to be schizophrenic and her doctor. It’s the only stand-alone and the only metaphysical book she has penned. She then segued into the crime/suspense genre, with now 21 books to The Unit series and number 22, the last of the series, being written. She will continue the unit’s story with the series that will be sequel to The Unit: The Unit: Gen 2, which will take place 25 years into the future as the children of The Unit’s two main characters enter the team. She is also considering another series, tentatively titled The Investigators, that will highlight the analysis of a crime scene from the gathering of evidence to the forensic analysis, and end with the solving of the case.

In this slice-of-life story set in September 1979, we meet Laurie Caswell, a bookstore clerk at the Northbrook Mall. That Saturday night she goes to the movies with her boyfriend, Dennis Nolan. Later, they go to her house and share some booze. After he leaves, she has a vivid dream of the dying mall in 2021 and is shocked at the darkness that engulfs the future. Is it a dream, a nightmare, a vision, or a prophecy?

Lisa Maliga is an American author of contemporary fiction, psychological thrillers, and cozy mysteries. Her nonfiction titles consist of how to make bath and body products with an emphasis on melt and pour soap crafting. When researching her cozy mystery, she discovered the art of baking French macarons. When not writing, Lisa reads an assortment of books, takes photos, skates, and is working on a series of baking and soaping video tutorials.