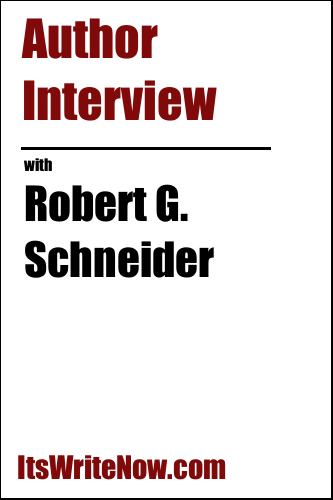 In the early 1980s, after the deaths of both his parents, troubled college dropout Doug Greenbaum seeks the meaning of life at the feet of charismatic Indian meditation master Baba Rudrananda. The guru’s core disciples seem batshit crazy and will stop at nothing to protect his shocking secret, but by the time the final truth about the corrupt holy man is revealed, Doug has found something far better to believe in — himself.

Will Doug find the meaning of life with meditation master Baba, or is the master really as crazy as he seems? To find out, Robert G. Schneider, author of ‘The Guru’s Touch’, and I will delve a little deeper into the world of the guru. Robert, looking back what initially inspired you to explore the early 1980s through Doug’s eyes in this book?

It began as a screenplay treatment that I submitted with my application to New York University Tisch School of Film & Television in the early ’90s.

Writing does not come naturally to me. It’s a grueling process that takes everything out of me.

What are you thinking about when you’re battling the feelings that come alongside gruelling processes?

When I write, I try to express my modest insights into the human condition with as much irony and compassion as possible.

What message do you feel comes through from your exploration of irony and compassion in this novel?

The main message of The Guru’s Touch is that blind faith is dangerous. Anyone under the right set of circumstances and conditions can fall prey to undue influence, regardless of how intelligent or successful they are.

I think the ability to fall prey to someone is really important to share. In your experience, is there such a thing as a true guru or are they all charlatans out to exploit vulnerable people like Doug, the protagonist of your novel?

All gurus should be considered narcissists and/or psychopaths until proven otherwise. That said, I think it’s possible to learn a lot from certain spiritual teachers even if some of their behavior and opinions are questionable. To paraphrase a certain Buddhist teacher, whose name escapes me at the moment, the important thing to remember is there is no such thing as an enlightened being, there is only enlightened activity.

You know, I really like that idea of separating the being from the activities, I think it makes it easier to think about the complex topics of, and around enlightenment. Were there events from your own life that also helped you explore these kinds of ideas in your book?

My novel The Guru’s Touch is loosely based on my own experiences in the India ashram of Baba Muktananda and Gurumayi Chidvilasananda.

So, were Doug and Baba the only characters whose characters were inspired by people that you have met?

Some of the characters are composites of people I knew in the ashram and others are based on people I knew during a later period in my life as a practitioner of Tibetan Buddhism.

What have you learnt from reflecting on these people, your experiences and your characters when turning your ideas into a solid tale?

I learned that despite the trauma I went through in the ashram, I am still a deeply spiritual person and India is my favorite place on Earth.

A love of India just speaks of a love of travel. Has your life allowed you the luxury of taking a literary pilgrimage?

In 2013, when I was traveling in India on a research trip for The Guru’s Touch, I made a pilgrimage of sorts to the Leopold Cafe in Mumbai, where many scenes figure in my favorite novel Shantaram by Gregory David Roberts. I included a few scenes at Leopold’s in my own novel as a homage to this great writer.

That’s fantastic! I’m sure that you’ve had so many more ideas to explore through writing through these adventures. What can readers who love your work look forward to next?

I’m working on a memoir about how I turned my life around after I left the ashram and moved to Brussels, Belgium in the 1990s and early 2000s.

Awesome, I can’t wait to see that story hit the shelves. But until then we’ll just have to be patient with what you’ve already published. To help readers and myself conquer patience, can you leave us today with your favourite line from The Guru’s Touch?

“Praise and blame, deprivation and gain, all thoughts disappear into the infinite as a wave merges back into the ocean.”

I can’t wait to catch that wave! Robert, thanks so much for guiding us through The Guru’s Touch today. Drop in again soon to update myself and readers on the next stage of your writing journey.

Excited to read the book we discussed today? Find it here on Amazon: ‘The Guru’s Touch: a novel ( ASIN: B072Q5HLZQ )‘.