Altrameda has served as a lab assistant and friend to the Tinkerer, her kind-hearted but perplexing inventor, for many years. But when she wakes up to discover she has been abandoned in a basement for more than two decades, she wants an explanation.

With the help of an old friend, Altrameda tracks down the Tinkerer and learns she is from a race of self-aware machines who were nearly wiped out by humans centuries ago: the Stormforged. Emboldened, Altrameda ventures to the Falkirk capital city of New Canton with others of her kind to reintegrate into human society. Their peaceful approach is fraught with complication, however, as not every Stormforged is interested in forgiving the humans for all but eradicating their people. In addition, the royal family has experienced a power upset that the Tinkerer might be directly responsible for.

Events heat up when Jonas, former student of the Tinkerer and current advisor to the royal family, interferes with the reconciliation attempts of the Stormforged. He believes he is to save humanity from an inevitable mechanical threat, and Altrameda must make a choice – to save humanity, or her people.The Stormforged is a genre-blending fantasy, science fiction tale about a sentient robot and her curious presence in a technologically stunted world. A machine grapples with a world she does not fit into; not in the past, nor the present. The Stormforged explores self-awareness, self-identity, dishonest relationships, acceptance of one’s past, and what it means to be human.

S. M. Grey grew up in Tucson, Arizona where Altrameda began as a D&D character. Altrameda’s author moved to Adelaide, South Australia in 2017. There, she spends much of her free time gaming, cross-stitching, and daydreaming about robots.

As a writer, she has a handful of short horror stories published in the Possessions anthologies by Paul Loh, as well as a few nonfiction pieces published during her time at the University of Arizona. She won 2nd place in the 2017 Australian Scribes Writers “Short Takes” contest. The Stormforged is her first novel.

Reach out to her at: [email protected]

COVID Aftermath is a post-apocalyptic science fiction thriller series exploring humanity’s future, as the characters face a harsh transmuted COVID pandemic world in which cultural and spiritual value conflicts arise. David Pan, the author, starts the story in his first story Game of Blood at Shanghai where an international cast of characters from North America, Europe, India, and China find a way to survive in this new era. For hard-core tech and history fans, some of the emerging technologies in AI, robotics, communications, and IoT are widely applied, juxtaposed with thousands of years of ancient wisdom and cultural heritage. 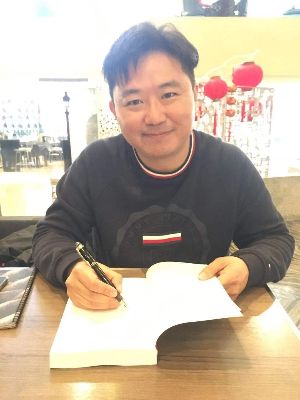 David Pan is a humanities enthusiast and a technology professional who has traveled extensively in 30 countries, exploring the cultural past, the likely future, and the current challenges facing mankind.