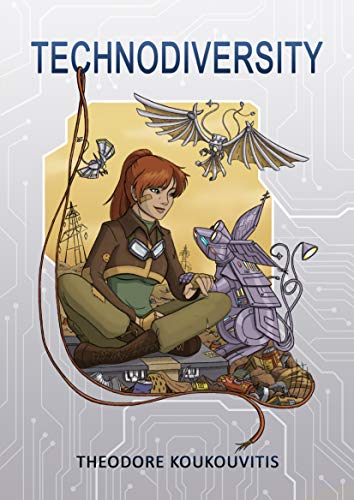 Scrap!
Here I am, out scavenging again, risking my life for junk, trying to do justice to the title of texplorer that was shoved on me six years ago.
What a colossal shame!
The fifth day of my second week-long expedition has already come and I’ve got nothing to show for it yet.
But, today I’m gonna catch something; perhaps a wireworm, a teen opticat, or maybe a limping magneticrab (healthy ones are furiously fast!) if I wander closer to a body of water.
Otherwise, I’ll just admit my uselessness and gather some immobile techforms on the last day as usual, so I don’t return to Mount Offline completely empty-handed.
No, better think big. Maybe I’ll wrangle a helibison and bring my first techbeast parts back home. Yeah, that would raise some eyebrows. But… nah, I won’t even try tackling a helibison. No skill and no cogs for that. I’ll probably stick to whatever I can capture with my net pole, or it’s just gathering Coulomb’s anemones, ion lilies, byteweed and the occasional lichenized transistor again.
But today, I hunt.
It’s been a few hours since I’m traversing that particularly quiet part of the Tech I chose to rest at last night. It’s fairly close to the Barren Trail that used to connect Mount Offline with the other settlements… when there were other settlements.
A sound interrupts my daydreaming and I make a quick mental note to suppress that habit of living in my head while out in the Tech. As I turn my gaze, I notice something.
There! Movement. I freeze where I stand and hope the technocreature hasn’t noticed me yet. I slowly turn my head towards a byteweed bush in the distance that just trembled.
Lucky! It’s a Faraday fox!
Hiding behind the bush, I can make out its quadrupedal body, the randomly spread LEDs on its back and that characteristic tail with its single, rotating white light, now unmoving and dark; a sign it’s not in an alerted state.
Suddenly, the creature turns around and three mechanical eyes fall on me. Yeah, three eyes mean it’s a Faraday fox alright, but now its tail has lit up and it’s running for it!
I give chase. Today it’s my lucky day. The fox runs towards the Barren Trail, so there’ll be less and less space to hide or slip away. I might actually do this!
The fox is fast and just large enough not to fit in my techling net pole. Hunting something big enough not to be considered a techling exhilarates me, but celebrations gotta wait because I’m gonna lose the fox if I don’t act fast.
I take out one of my EW batteries to use as a pulse grenade. A single battery holds enough juice for my electroweak pulse bracer to protect me from the Tech’s invisible nasties for a day, but a Faraday fox in the bag is countless times more valuable.
Something inside me stops me from throwing that EWP grenade. It’s too strong; it might disable the fox altogether. Trying not to take my eyes from the spinning light on the fox’s tail, I take out the half-used battery from my bracer and replace it with the fresh one I was about to throw. I arm the battery with one hand and… I almost stumble on something. Junk!
I regain my pace as fast as I can; I’ve lost half a step but now I’m ready to throw. I just hope the battery I’ve been using since yesterday still has enough juice to disorient the fox without… killing it, I guess.
I throw and… it’s a hit! The fox slows down, it’s tail-light goes black and I’m on top of it in a split second.
I kneel down, towering above it. I put one hand around the fox’s neck and the other over its face, covering digital eyes that look up at me.
…
Check out Technodiversity, a fresh science fiction adventure that combines a sophisticated narrative in the vein of traditional sci-fi classics with breathtaking action, whirlwind romance, and spunky humor.