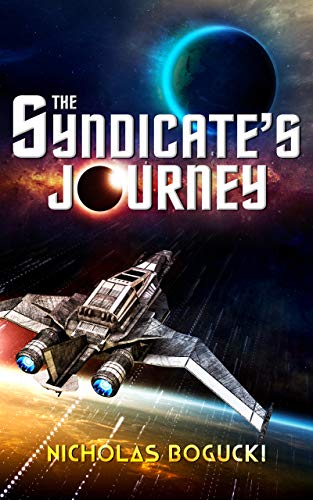 If you liked Star Wars, Brave New World, and Dune – you will love the book The Syndicate’s Journey!

Thousands of years in the future, light-years away from the Solar System and humanity are Earth’s descendants which are called transhumans. They are living on a planet called Nuwurth in the Tarkington System.

The transhumans are apart of a worldwide government program called the Syndicate where six generals are in charge of the entire world.

When four of the Major Generals are sent on a classified mission, things go awry.

With lives at stake it is up to the Lieutenant Generals to intercede before it is too late. Will they be successful in stopping the Generals plan? Or will the Major General’s blood be on their hands?

The Syndicate’s Journey is an action-packed military sci-fi adventure with elements of genetic engineering, and first contact science fiction!

How was my second year aboard the TFP Icarus? Well, I chased a woman to hell and back and won her heart. Sort of. I got a promotion and led a team of Marines in a war against mysterious alien forces intent on seeing me dead. I was accused of being a corporate spy and saved a colony from hostile takeover. I broke up with my girlfriend, fraternized with the Admiral’s daughter, and discovered the substance that binds the universe together. Well, not really. I didn’t actually fraternize with the Admiral’s daughter. But after the year I’ve had, I probably should have.