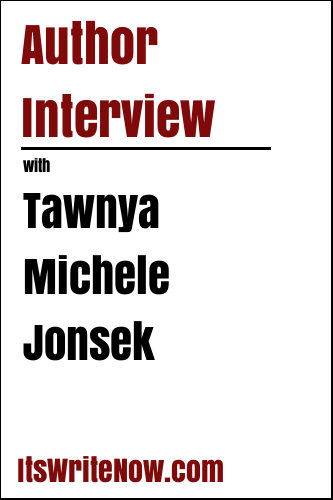 Her children are all she has left. She’ll tear up heaven and earth to protect them….

Will she be able to protect all that she has left? Tawnya Michele Jonsek, the author of Moira’s Song, has kindly joined me today to chat about the protectiveness of motherhood and the pull of vampires. Tawnya, thanks for chatting with me about the first novel in the Moira McCauley series with me. How did these first notes of Moria’s tale come to you?

Moira’s song started with the title. I couldn’t get the title out of my head. And then Moira herself began to become more and more clear to me. I still didn’t understand the title until I wrote chapter 14. It amazed me how things I’d already written and the use of music through the book fit, even with a vampire story.

Of course. My own children were going through some painful life experiences. I couldn’t keep it from happening. I could only teach them how to move through life even when it hurts. But it got me thinking about what a mother would do to protect her children. Not that I want to do any of the things Moira does in the book, but it did get my creative juices flowing. What if we weren’t bound by our moral codes? What would we do then to keep our children safe? That kind of thing.

Which of these moral questions, or creative juices did you feel was most significant to Moira’s journey?

That a mother’s love is strong and can take you to the best places in life, but it can also take you to the darkest. Also, the book become became a love letter to my Irish ancestors. The more I dug into my own roots for this book and the more I researched Ireland’s history, mythology, and language, the more this became my love letter to Ireland and her people.

How was the love in all of each of these forms translated into the fictional characters we meet with Moira?

Sometimes they were based on personalities I knew. Sometimes, they just showed up.

What did you love most about taking the literary journey with all of the characters that showed up?

The act of writing. That is when I feel most alive. I write because I feel compelled to write. Because I can’t imagine living life without writing.

Do you feel that compulsion daily?

I write every day and I aim for at least 1500 to 2000 words per day. My location varies. When writing Moira’s Song, I wrote at the doctor’s office, in line to pick up the kids from school, just whenever I could fit in the time.

Yep, writing line to pick up the kids is certainly a sign of a compulsive writer! With such a compelling force to write, I’m sure you have another story in progress. What can you tell us about it?

I’m working on the second book in the Moira McCauley series. There is an unedited sneak peek in the back of the book.

Thanks for the sneaky tip! As Moira’s voice has continued into a second book, have you found your plan for attack has changed? Or are you still finding out the connections later on in the writing process?

I have a basic idea. I tried outlining everything and it didn’t work for me. Blocked my creativity. But I usually know the major plot points. The crazy thing is sometimes I write something and am blown away when I did further into the research because it shows me my creativity was aligned with things I didn’t know when I was writing.

*Laughs* You have to love it when your mind knows more than you think you do! And it would no doubt accelerate the editing process, as you don’t need to continuously correct your ideas. Does your writing compulsion extend to editing?

I hired an editor, but I did do a fair amount of editing myself. I was taught to edit by my high school teacher, Mrs. Carmichael. Her editing rules stuck with me. I still use them today.

Do you feel that your voice as an author has progressed since your first novel, or indeed since Mrs Carmichael’s class?

Definitely. I’ve become more of my own person.

Let’s take a little time now to explore that person behind the pen, with a few of our quirkier questions. We’ll start with, what is your zodiac sign?

Taurus on the cusp of Gemini

Well…. Poison Ivy better watch out. He would make a great vampire. Batman is already tortured. I think the best vampires have dark tortured souls.

Perhaps vampire Batman, or a character inspired by him, could meet Moira in a future novel, but until then, are you left or right-handed?

Fluffy and mystical, quite the mix! We’ve seen a wonderful mix of your personality in today’s interview, can you round out your fun by sharing the best line or lyrics from within Moira’s Song?

The seeds of destruction and beauty lay entwined in the heart of every man.

Choosing which of those seeds to germinate can be quite the battle! Tawnya, thanks for sharing the emotions behind the vampire fangs today, and I hope you continue to grow as an author as Moira’s tale unfurls.