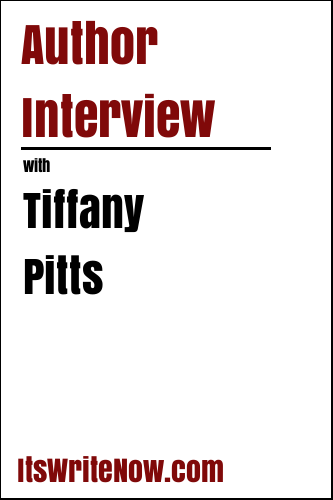 He sparkled in the mid-morning sunlight like a vampire-themed disco ball.

Today I’m catching up with Tiffany Pitts to find out more about her novel, Double Blind and the reasons that someone would sparkle like a disco ball. Tiffany, thanks for joining me today. Can you kick of today’s interview by giving us a quick synopsis of what Double Blind is about?
Deli is a petite spitfire who packs a lot of punch–jujitsu style. After her brother disappears during a high stakes business negotiation, she finds herself in Hong Kong with a target on her back. Her brother’s partner, Carl, is a gangly tech geek with an aptitude for espionage. Whether Deli needs his help is questionable, but she’ll take every advantage to find her brother–and their missing technology. In the meantime, Deli’s cat has found some of the missing technology…and eaten it, becoming an accidental superhero. Will his enhanced biology be enough to save the people he loves?

That is an interesting premise. What inspired you to write about enhanced biology and becoming a superhero?
I got the idea from reading a book on theoretical physics. It was supposed to be about these nanotech robots that could integrate with your physical body and give you super powers. But one of the scenes had a big fluffy cat in it and the cat ended up eating one of the nanobots and it was way more entertaining that way so I went with it.

So the incorporation of science was an important part of writing the novel for you?
Yes, I love physics although I’m not very good at it. Every time I read something mind bending-the constantly evolving experiments on teleportation for example, my mind goes off and thinks “What if…” This book happens to be “What if…a big fat cat ate your science project.” There’s a lot of other stuff in there too. It’s not just cats.

We’ll get back to the cats, but first I want to know if you have much of a scientific background that assisted you when writing?
I was a molecular biologist for many years before I retired from the lab and started writing full time. I miss the ways we used to entertain ourselves during long boring experiments. I do not miss the autopsies.

Fair enough, I can see why that would be easily forfeited. What kinds of other stuff did you look into while writing this book. Lots of cat facts?
All sorts of research! How far can the average house cat jump? What’s the most common name for a yacht? What’s the time difference between Hong Kong and Seattle? I spent so much time researching Hong Kong. It’s a fascinating city and I hope to visit it soon.

I hope that you get that opportunity soon too. So you haven’t been to Hong Kong, but did you have any life experiences that you directed into the flow of the story?
Constantly – but in small way. What does a refrigerator door sound like when you open it? What’s it feel like to be at the airport wicked early in the morning? And flirting…oof. I spent so much time trying to flirt with my main characters that I halfway fell in love with them.

Is there anyone that you fell in love with enough that you would want to go on a date or beer with if they came to life for real?
Carl Sanderson. I spent so much time trying to get Delilah to fall in love with him that I want to take him out for a beer and tell him it’s all going to be okay. He’s not nearly as dorky as he thinks he is and that he should really not worry about stuff so much.

Was he your favourite character, or did other characters impress themselves onto you more?
Definitely! Toesy (the cat) is constantly with me these days. He is based on a cat we used to have (RIP Katzuhiro) and I think about his reaction to situations. What would Toesy do here?

That’s a great question to ask yourself while writing. Did you find looking at the story from Toesy’s point of view the most illuminating element of writing this story?
I had such a fun time writing this book. All the characters were delightful to be around. When I finished with the manuscript I was surprised at how much the characters didn’t want to leave me. So I started writing another book immediately. It’s very rewarding to have a cast of imaginary friends that frequently make you laugh. Although sometimes I’m not at my computer when they’re making me laugh which can be a bit disturbing for my friends and family.

It’s good for your friends and family to get a bit disturbed from time to time. Keeps them on their toes. So you’ve already started the next adventures of Toesy, Carl and Delilah?
Yes, currently I’m working on another book in this series, Parallax. Toesy’s transformation was accidental but there’s nothing accidental about him now.

Go Toesy. It sounds like he’s going to have himself a grand old time which will be a good read. What approaches do you use to keep your characters and your writing moving?
I write every day that I am able. That doesn’t mean every day because I have two children in grade school which is enough to make anyone crazy. I have a few tricks that help me get my butt in the chair though – I write in a certain spot and I have a German shepard who keeps me on a strict schedule of writing (and cookie) time followed by a walk around the block then back to more writing (and cookie) time. If I stick to that schedule, I can usually meet my 1000 words a day goal.

I’m glad to hear that your writing accountability partner is doing his job well. He deserves those cookies. Do you use the same strategy for editing?
Editing is a constant process. I edit the entire manuscript several times. I probably read it over 30-40 times before ever sending it to an editor. I’ve been working with the same editor for a few books now. Maggie knows my writing style (and which typos I’m susceptible to) and constantly surprises me how much she can tighten things up and make them better.

Does that end-to-end process take a long time. Did it take long for Double Blind?
Two years. But I wrote it twice because I wasn’t sure about what I was writing the first time around.

Yep, that will stretch out your timeline just a tad. Do you have any tips for helping authors avoid that re-write of a novel?
Write your book. Edit it well. Write some more. Learn about promotion and marketing. Write some more. Keep writing. Don’t stop writing even though you have a million things to do.

Thank you for that solid advice. I’m sure it helped some of the other authors out there. And now we’re onto my favourite part of the interview, the quick fire round. Just relax and answer the following questions as quickly as possible:
Who is your favourite literary character?
The Luggage from Terry Pratchet’s Disc World series and the Death of Rats. Both characters are limited in their ability to communicate but are competent and complex all the same. SQUEAK.

Can you stand on your hands unassisted?
Not anymore.

What are you currently reading?
Well, I was recently in the Olympic rain forest for about a week so I’ve read a lot. I finished Robert Dugoni’s Tracy Crosswhite series which was great. I also read The Cuckoo’s Egg by Cliff Stoll which is a true story about an astronomer at Lawrence Berkley Lab tracking down a computer hacker in the 90’s. A friend of mine balked when I told him I enjoyed the book but he IS an astronomer in Berkley and probably too intelligent to find the book entertaining. I did, which may be telling.

If you could steal one thing without consequence what would it be?
There’s a huge rock on Second beach in La Push that is water-worn in such a way that it looks like a bench. I love that rock.

Can you curl your tongue?
Yes!

Which are cooler? Dinosaurs or Dragons?
Dragons. Dragons have gold and some of them sound like Benedict Cumberbatch.

Okay, I wouldn’t have thought that, but you may be right. What’s the most unusual name you’ve ever come across?
Tuesday Moxley-I don’t remember her last name. She’s a real person though I’ve never met her. I know her name because I used to work in the Newborn Screening lab of WA state. All babies have a blood sample (heel poke) taken during their first few weeks of life to screen for things like Phenylketonuria (an inherited genetic disorder that is manageable if caught early and baby is kept on a strict diet) and sickle cell anemia. I worked in the lab that ran these tests. Every day we would get 600-1200 cards with little spots of blood and the baby’s name written on them. As a writer, it was an incredible source of inspiration. There were some other notable names that came through but Tuesday Moxley was the best I can remember. You can’t change your name to Tuesday Moxley and get away with it. No, you gotta be BORN into that. You own it right from the start.

And that is something you have to own without hesitation.  What is your best tip for authors?
Never ‘Find and replace all’ if you’re changing Tim’s name to Todd. Innocent vicTodds, everywhere.

I like that one. Always use that find and replace judiciously because it can really make a bit mess very quickly. Tiffany, thanks for joining me today, I’ve enjoyed picking your brain and I wish you the best of luck with your book promotion.

Want to connect with Tiffany?  You can find her here: